"We currently have 20,000 users and our target is to grow to half a million by the end of the year," Mayank Shah, co-founder of SmartPocket, told Techcircle.in.

The money will be used for product development, customer acquisition and expanding the B2B business.

The news was first reported by The Economic Times.

The startup was founded in April 2014 by former Goldman Sachs employees Kiran Shastri and Mayank Shah. While Shastri has a bachelor's degree in engineering from Mangalore University, Shah has done his engineering from R.V. College of Engineering, Bangalore.

SmartPocket is positioned as a mobile technology platform that connects offline businesses to repeat customers. It can convert a mobile device into a singular channel for all card transactions by managing a user's loyalty cards on the phone. 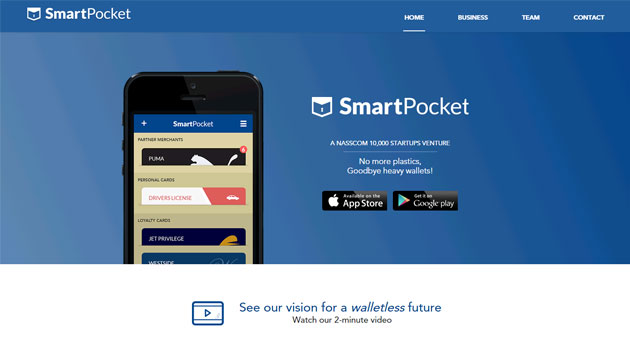 The startup was incubated at Nasscom 10,000 Startups programme. It was also picked up by Google for its first mentorship programme in the country - Google LaunchPad.

So far it has four clients -- Puma, PEOPLE, Regal and Peter England.

Incorporated in 2014 by Presha Paragash and Shweta Singh, Sol Primero is an early stage investment firm based out of Bangalore. It focuses on high growth and emerging businesses that can demonstrate the ability to scale quickly. It has invested in two startups apart from SmartPocket so far—Bangalore-based mobile and cloud based solution for ride sharing Ridingo and Delhi-based Zostel, a chain of hostels for backpackers.

Prior to founding Sol Primero, Presha spent five years with UBS Investment Bank in London where she was in the advisory business specialising in mergers and acquisitions. Shweta, on the other hand, worked with the restaurant discovery platform, Zomato, in the international operations team. Both of them have MBA degrees from the Wharton School, University of Pennsylvania.