Dating startup TrulyMadly raises $5.5M in Series A round from Helion & Kae Capital

Truly Madly Matchmakers Pvt Ltd, which owns and operates dating site TrulyMadly.com and pushes itself as a mobile-first venture, has raised around $5.6 million (Rs 35 crore) in its Series A round of funding from early stage investors Helion Venture Partners and Kae Capital, the company said on Monday.

Ritesh Banglani from Helion Venture Partners and Sasha Mirchandani of Kae Capital will join the board of the company.

"It's heartening to have marquee investors like Helion and Kae on board as it reaffirms our faith in the model and approach. They bring a lot of credibility and experience with them, which will be very useful to help us scale and grow rapidly, as we prepare to serve an ever increasing number of users," said Sachin Bhatia, CEO & co-founder at TrulyMadly. 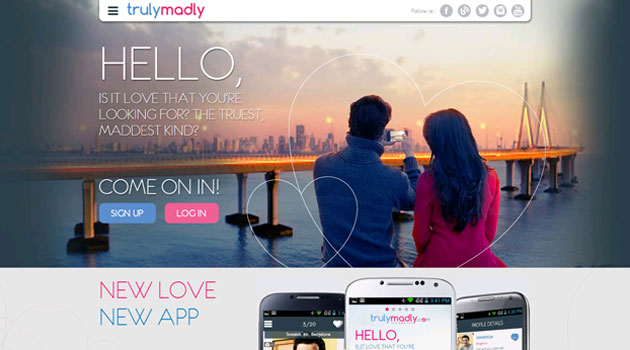 "TrulyMadly is rightly positioned to ride the online dating boom. When we saw the engagement metrics that the team has managed month on month, we were convinced they were on to something big and that we had to be part of this story," added Banglani.

Mirchandani from Kae Capital said, "The team's focus on creating an app for singles, keeping verification and compatibility in mind, is what attracted us to invest in TrulyMadly."

Founded in 2014 by the trio of Bhatia, Rahul Kumar and Hitesh Dhingra, the startup seeks to help urban individuals find right partners. The mobile app lets singles discover each other through shared interests and personality profiles. While Kumar and Bhatia are former MakeMyTrip employees, Dhingra was co-founder and CEO of LetsBuy.com (acquired by Flipkart.com).

According to the company, it is different from regular matrimony sites such as BharatMatrimony.com and Shaadi.com where parents make profiles of their children. The platform is for new-age professionals and ensures that they find their partners based on their intelligence and interests rather than based on caste, creed and family background.

It claims over 35 per cent of its user base comprises women.

This space has been attracting lots of investor interest in the recent past. Last month, Aisle Network Pvt Ltd, which runs a matchmaking site for urban Indians under Aisle brand, raised $100,000 in seed funding from a group of angel investors, including Anand Vijay of Microsoft and Shashank Mehrotra of BigRock, among others.

Delhi & Singapore-based Thrill Pte Ltd, a mobile dating startup which runs its apps on Android and iOS under the Thrill banner, also raised an undisclosed amount from People Group, which owns matrimonial portal Shaadi.com, for a significant minority stake in January this year.