Ola buys TaxiForSure for $200M in cash and stock deal

The breakup of the cash component of the deal could not be immediately ascertained but with the stock swap, TaxiForSure investors—Accel Partners, Helion Venture Partners, Bessemer Venture Partners and Blume Ventures would get small minority equity stakes in Ola.

Ola is already the top player in its business and TaxiForSure is believed to be among the other large firms in its space. Both are locked in a pitched battle against global giant Uber and other local players such as hybrid venture Meru.

The company said TaxiForSure will continue to operate as a separate entity, at least for now, with Arvind Singhal (currently COO) being appointed CEO.

Aprameya Radhakrishna and Raghunandan G, co-founders of TaxiForSure, will contribute in an advisory role for a certain period.

This is the second largest deal in the consumer internet/e-commerce business behind Flipkart's acquisition of Myntra last year. That deal was reportedly worth over $300 million.

TaxiForSure is currently present in 47 cities with over 15,000 vehicles registered on its platform.

Ola said the deal compliments the two companies, as TaxiForSure follows a different model of supply and distribution by working with cab operators compared to Ola's model of working with drivers who own their own cabs. 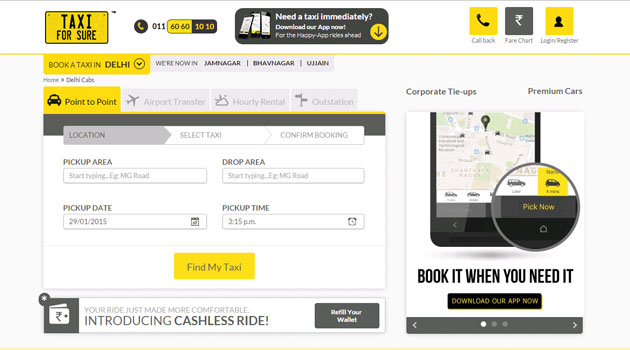 Bhavish Aggarwal, co-founder and CEO, Ola said, "TaxiForSure has a great team and they have built a very exciting business in a short time. There's a lot of complementary value in the strategy TaxiForSure has followed. I'm very excited to welcome the TaxiForSure team onboard and look forward to working with them towards realising our common vision."

Raghunandan G, co-founder and CEO, TaxiForSure said, "Post this acquisition; the combined entity will be strong enough and better capitalised to offer the best value to all our stakeholders, including our customers. This development ensures that industry attractiveness is preserved and the combined entity can race ahead and continue to create unprecedented value for all stakeholders."

Both the companies were founded in 2011. Olacabs was founded by IIT Bombay alumnus Aggarwal and Ankit Bhati. TaxiForSure was founded by Raghunandan G and Radhakrishna, both engineering graduates from NITK Surathkal who got their management degrees from IIM Ahmedabad. Radhakrishna has also worked as the head of business development for PDS at Jones Lang LaSalle, India while Raghunandan earlier worked with Feedback Ventures as a consultant.

Last August TaxiForSure raised an undisclosed amount in its Series C round of funding led by Accel Partners, with participation of existing investors.

Olacabs raised a large Series D round where Japan's SoftBank led a $210 million investment in the venture. Existing investors also participated in the round.