Apple made quite a few announcements at its 'Spring Forward' event held in San Francisco today. As expected, the company launched its first smartwatch called 'Apple Watch', which was unveiled in September last year. Interestingly, while the device will be available for purchase for a starting price of $349 (Rs 21,882), its cost will go upwards of $10,000 that is well over Rs 6 lakh.

The company also refreshed its MacBook Air line, as well as the 13-inch MacBook Pro with Retina display. In addition, it also unveiled an all-new MacBook that the company claims is an entirely new line of notebooks.

Here is a low down on everything the Cupertino-giant announced, unveiled and launched at the event. 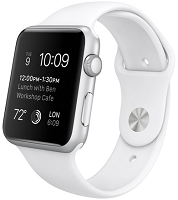 Christened Apple Watch, the device comes with a rectangular retina display and offers 11 customisable watch faces ranging from traditional analog faces to new faces like dynamic time-lapse, astronomy face, and the Solar face, among others.

Apple Watch has an iOS-based user interface that has been created specifically for a smaller device, and enables its users to send and receive messages, answer calls to their iPhone, as well as send something as personal as their own heartbeat. The smartwatch also features Wi-Fi and Bluetooth 4.0 to pair with the user's iPhone.

The retina display on Apple Watch features 'Force Touch', a technology that senses the difference between a tap and a press- providing a new way to access controls within apps. Apple Watch also introduces the 'Taptic Engine' and a built-in speaker that together enable a number of alerts and notifications that you can both 'hear' and 'feel'.

Digital Crown: Apart from the touchscreen, Apple has also added a specially designed and engineered 'digital crown' in the smartwatch, in order to enable users to scroll, zoom and navigate fluidly, without obstructing the display. The digital crown also serves as the 'Home' button and a convenient way to access Siri, Apple's personal voice assistant.

Read our detailed coverage of the Apple Watch here.

The laptops come with Intel HD Graphics 6000 and have 4GB of RAM. It runs on the OS X Yosemite operating system and, in terms of internal memory, users will have a choice between 128GB and 256GB of flash storage. 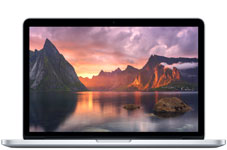 The laptop has a 13.3-inch LED-backlit glossy display with IPS technology (2560 x 1600 pixel resolution) with 227 ppi pixel density and it runs on the OS X Yosemite operating system. The dimensions of the laptop are 314mm x 219mm x 180mm and its weight is 1.58 kg. In addition to a FaceTime HD (720p) camera, the device also comes with dual microphones and stereo speakers.

It comes with Intel Iris graphics 6100, and has a Force Touch trackpad for precise cursor control and pressure-sensing capabilities. According to the company, the all-new trackpad enables force clicks, accelerators, pressure-sensitive drawing and Multi-Touch gestures.

All-New MacBook: Apple unveiled the MacBook, a new line of notebooks which the company claims are the thinnest and lightest Macs ever. According to the company, the new Mac weighs less than a kilo and is 13.1 mm thin. It features a 12-inch Retina display that is the thinnest ever on a Mac, and a compact USB-C port for data transfer, video out and charging in a single connector.

In a first for Apple, MacBook will be available in three aluminium finishes that include silver, gold and space grey.

"From its fanless design, ultra-thin Retina display and full-size keyboard that is 34 per cent thinner, to its all-new Force Touch trackpad, USB-C port and terraced battery design, the new MacBook is the future of the notebook," said Philip Schiller, Apple's senior VP of worldwide marketing.

HBO NOW: Apple and HBO announced that 'HBO NOW' is premiering next month, making an HBO subscription available directly to Apple customers for the first time ever. As part of the partnership, iPhone, iPad, iPod touch and Apple TV users will be able to purchase HBO NOW directly in-app as a standalone service to watch HBO's original TV shows, Hollywood movies, documentaries, sports and exclusive comedy specials, for $14.99 (Rs 940) a month.