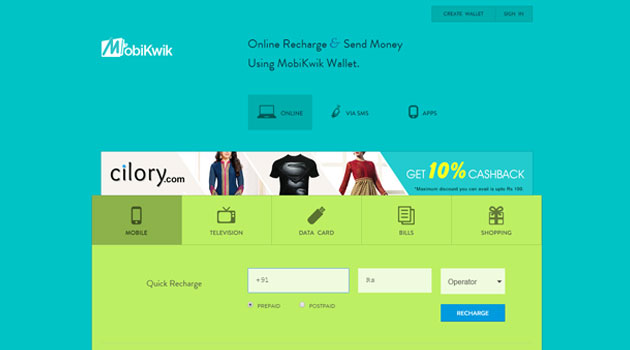 Gurgaon-based One MobiKwik Systems Pvt Ltd, which runs online recharge platform and mobile wallet venture MobiKwik, has raised $25 million (over Rs 150 crore) in a Series B round of funding led by Tree Line Asia, it said on Wednesday.

The firm will use the money in technology/data analytics verticals, brand building and growing the network of users and merchants.

"With over 15 million wallet users, and neutrality towards 25,000 merchants, we are now aiming for the next level of growth and building a ubiquitous mobile wallet for a billion Indians. With 90 per cent of Indians being unbanked, simplified payments via a mobile wallet make perfect sense," said Bipin Preet Singh, founder and CEO, MobiKwik.

It claims to have over 15 million users and 25,000 merchants (retailers) currently.

MobiKwik is focusing to create a brick-and-mortar retail network of over 100,000 merchants across India. These stores will serve both as points for cash loading into the wallet and for wallet payments acceptance. The company has also applied for a payments bank licence.

It recently tied up with CafÃ© Coffee Day, where customers can pay for their coffee and snack across all CCD outlets via their MobiKwik wallet. The firm is looking at more such offline payments partnerships in the future.

MobiKwik had earlier raised under $5 million in its Series A funding from an unnamed VC firm. This is believed to be Sequoia, which is now being counted as an existing investor in the firm. The VC firm had earlier also backed Zaakpay, another payments venture started by the same co-founders.

MobiKwik competes with the likes of Paytm (recently got huge investment commitment from Alibaba and SAIF Partners) and Freecharge (which is into online recharges business).

Ambit Corporate Finance was the exclusive financial advisor to the latest funding transaction.