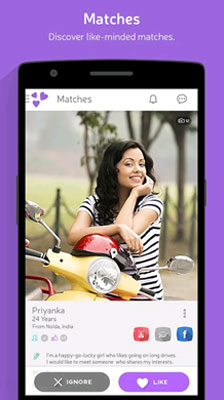 Most of the features are similar to that offered by others in this space. Matchify positions itself as a women-focused dating app and allows them to communicate directly with others while men registered on the site can do so only for when they get a 'match' to like them back.

"We are aware of the growing need of young Indians for meaningful relationships matching their interests and near their current location. Matchify is a robust and secure platform for like-minded people and it's on mobile. That's what makes it interesting," said Sai Chithra, business head, Matchify.in

The mobile app is currently on Android and will soon be launched on other platforms, the firm said.

Another app which puts women in command is Thrill. Early this year, Matrimony.com competitor People Group, which owns matrimonial portal Shaadi.com, invested an undisclosed amount to pick a significant minority stake in Delhi & Singapore-based Thrill Pte Ltd, a mobile dating startup which runs its apps on Android and iOS under the Thrill banner.

Women can sign up whenever they want on Thrill but prospective male members need to apply to join, after which they are rated by female users. This rating pushes up the male user's profile which, after approval, lets them find female users.

Some other dating apps active in India include TrulyMadly.com, besides Tinder and Krush. In 2013 another India related dating startup StepOut (formerly Ignighter) that had raised funding from several angel investors, was acquired by Twoo. Another player in the same space is TwoMangoes.

It is backed by a clutch of VC firms and is seen as a prime candidate among the Indian consumer internet space to go public.