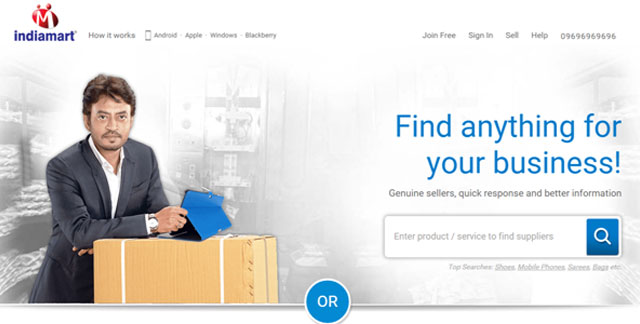 IndiaMART InterMESH Ltd, which runs an online B2B platform for small and medium businesses connecting global buyers with suppliers under the brand IndiaMART, has initiated talks to raise as much as $200 million for its recently launched property Tolexo, which enables online transactions, sources close to the development told Techcircle.in.

It could not be immediately ascertained if the funding would be routed through the parent company or through Tolexo Online Pvt Ltd, a part of IndiaMART, which runs the website.

The group has had early conversations with a few prospective investors.

When contacted, Brijesh Agrawal, co-founder of IndiaMART and CEO of Tolexo, refused to confirm names but said he is in talks with 10-12 "large investors".

Another source cited above said, the plan is to raise funds from two-four large investors within 12 months.

Tolexo was launched in August last year and is aggregating demand from construction, manufacturing, laboratory and hospitality companies, primarily for industrial goods.

An extension of its 19-year-old parent IndiaMART, Tolexo is growing its transactions 60 per cent month-on-month, according to CEO Agrawal, who refused to share details of the transaction.

It competes with other B2B focused e-com sites such as Industrybuying.com, which is seed-funded by SAIF Partners and Mogli Labs.

It is learnt that several others are also catering to demands of specific industries such as construction, labs and industrial goods.

Tolexo is looking to bring online B2B transactions which are still done the traditional way.

Early this year, it roped in Harsh Kundra as co-founder and head of product and technology. Kundra was previously CTO at Rocket Internet-backed lifestyle e-tailer Jabong.com. Prior to that, he was a founding-member at Info Edge-backed Meritnation.com, where he oversaw product design and management.

Tolexo is leveraging the existing buyer and seller networks that the group has acquired and claims to have built a collection of over 5 lakh products in a span of six months, and at the current growth rate, it will have 5 million products by 2015-end.

Backed by Intel Capital and Bennett, Coleman & Company Ltd (BCCL), IndiaMART offers products that enable SMBs to generate business leads and use business information (finance, news, trade shows, and tenders, etc.). While IndiaMART is essentially a B2B platform that connects global buyers with suppliers, Tolexo.com is an online retail marketplace that enables transactions between the two.

Tolexo.com is a subsidiary of IndiaMART but also counts Navneet Rai, co-founder, Inkfruit.com (merged with private label fashion e-tailer Zovi.com back in 2013), as a co-founder.

The firm has set an ambitious target to achieve $1 billion gross merchandise value by 2017 and $10 billion by 2020.

IndiaMART was styled like India's Alibaba. However, while Alibaba ventured into B2B and B2C online commerce space and scaled up to become the world's largest online seller, IndiaMART confined itself to matching buyers and sellers.

In the B2C space, it has seen ventures like Flipkart and Snapdeal, among others, build a large business and command high valuations. IndiaMART is now trying to get at least some of the action and investors money.

According to Agrawal, the timing is now right to enter into online B2B e-com business as the B2C e-com space has triggered the right momentum. He notes that a certain traction in B2C e-com is essential to push through B2B e-com.

He is confident that Tolexo's revenue would equal that of its parent in two years. Agrawal says IndiaMART posted Rs 210 crore revenue during 2013-14.

IndiaMART has put in initial capital of around Rs 100 crore to build Tolexo. "We have strong balance sheet to fund this growth," he said.