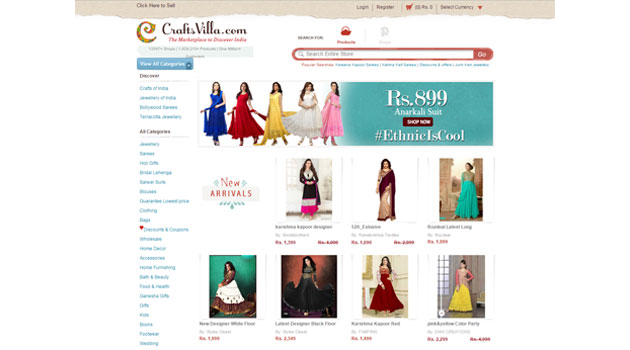 Based in Germany, Global Founders Capital (GFC, formerly European Founders Fund GmbH) is a $195 million venture capital firm which was founded in 2013. It seeks to invest in technology sector focusing on internet, software and wireless projects and provides seed, early, growth and later stage capital to companies. Last year, it had invested in Gurgaon-based lifestyle fashion and apparel e-tailer Jabong.com alongwith UK's CDC.

The company would use the money to grow its team in India and will also invest in scaling its technology platform.

"We are now facilitating over 100,000 transactions per month and are growing rapidly. This Series B funding will help us in building a brand and in investing in technology to serve our merchants and customers better. We are aspiring to be 10x our current size by the end of this year with 20 million products on our platform," said Monica Gupta, COO and co-founder of Craftsvilla.com.

Founded in 2011 by husband-wife duo Manoj and Monica Gupta, Craftsvilla.com e-tails products across categories, including clothing, handicrafts, jewellery and art. It sells its products through 12,000 sellers in the country.

"Craftsvilla has been growing rapidly below the radar and has now become the leading e-commerce marketplace for ethnic products in India. Manoj and Monica are an inspirational founding team who bootstrapped the company for the last several years after facing a prolonged period of slow adoption of ethnic products in e-commerce in the early years," said Shailendra Singh, managing director, Sequoia Capital India Advisors.

Sequoia has been investing actively in India. Since January this year, it has invested in more than one-and-a-half dozen companies.