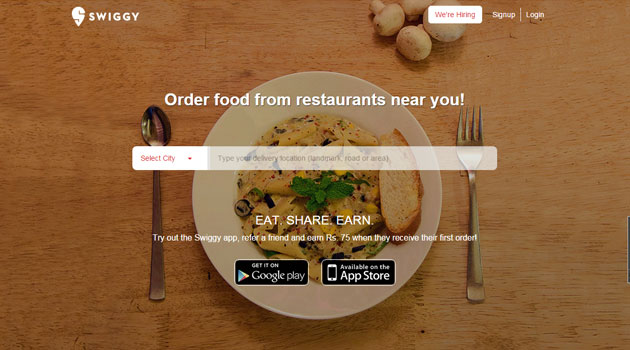 Swiggy has tied up with 'cloud kitchens' such as Eatongo and Brekkie, both Bangalore-based firms, and is in the process of signing up with few more in the coming weeks, said Nandan Reddy, Swiggy's co-founder.

Cloud kitchens are online breakfast and brunch units that do not have a physical restaurant. They offer food though their websites/apps and also deliver to their customers.

Reddy said that his company aims to provide infrastructure that would take care of order taking, delivery and logistic requirements for cloud kitchens.

"We are designing our approach towards such a model because unlike regular restaurants, they normally have rotating menus," said Reddy. He believes that this business model will drive the future for the entire restaurant industry.

"It will democratise the entire space because here players really do not have to pay hefty rents for space, but can start their restaurants anywhere," he said. Even a small kitchen the farthest corner room in the fourth story of a commercial building can operate as a cloud kitchen," said Reddy.

Swiggy was formed in 2014 by Sriharsha Majety, Nandan Reddy and Rahul Jaimini. Majety and Reddy are BITS Pilani alumnus while Jaimini is an alumnus of IIT Kharagpur.

It offers online ordering from restaurants and manages delivery using a fleet of personnel equipped with smartphones with an app powered by routing algorithms.

Swiggy, competes with Foodpanda, TinyOwl, delyver.com and others for a slice of what is becoming a fairly crowded space. Others like Zomato have also entered the food ordering business but is not involved with delivery itself and just provides an ordering platform.

Cab hailing app Ola (formerly Ola Cabs) has been pushing the envelope when it comes to food delivery, aiming to deliver hot meals to customers doorsteps in 20 minutes.

Swiggy is now executing a pilot project to experiment with 15-minute food delivery service in Bangalore.

Reddy said the startup is currently building the required infrastructure around this proposition and is exploring various methods to deliver food "insanely fast" - as he terms it.

"We are doing the trials now, setting up the catalogue. We are exploring different options as to how we can keep a relatively large quantity of food in a temporary box with minimal drop in temperature. So, whenever there is an order, the food can be delivered quickly," Reddy said.

Swiggy had raised $2 million (Rs 12.5 crore) from SAIF Partners and Accel Partners in a seed round in January this year. Separate media reports had suggested that Swiggy raised another $15 million (Rs 96 crore) in March from Norwest Venture Partners; however, Reddy refused to confirm the development and said the reports were speculative. The company is likely to make a formal announcement of its new round of investment in the coming weeks.

Swiggy claimed it has grown by 15-20 times since the first round of funding in January.

"We did not do any marketing or promotion. We didn't give out a lot of discounts either. We were mostly constrained to one or two localities in Bangalore. The first round gave us a lot of confidence and we invested the money primarily building the infrastructure for the three main stakeholders involved â€“ delivery executives, restaurants and customers," added Reddy.

Swiggy employs around 500 people including 250 delivery executives. The startup plans to ramp up its delivery fleet to engage over 2.000 personnel across cities by the end of this year. The company recently started operations in Hyderabad.

The online food ordering and delivery space has turned out to be a new hot space for investors, as per data from VCCEdge, the data research platform of VCCircle.