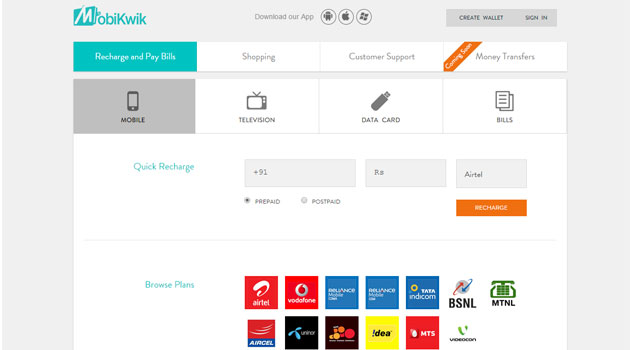 "We don't have the audited numbers right now, but I can tell you that we have crossed the 2014-15 target of Rs 1200 crore ($190 million) sales and are looking forward to $700 million sales this year," Upasana Taku, co-founder of the company told Techcircle.

The Gurgaon-based company aims to turn profitable by financial year 2016-17.

"We expect to meet our goal of 100 million users for the mobile wallet by 2016-17 and so next year we anticipate to start generating profits," she added. Profitability is the holy grail for India's fast growing consumer internet firms.

MobiKwik's competitor, the Alibaba-backed Paytm saw the gross value of the transactions conducted on its network rise to around Rs 4,000 crore by 2014-end from around Rs 1,000 crore the year before. Paytm is said to be targeting gross merchandise value (GMV) run rate of $3-4 billion by March 2015.

MobiKwik plans to spend about Rs 100 crore on marketing this financial year. Most of the money will be deployed on television and online campaigns.

MobiKwik is also betting big on joining hands with offline service provider. It started a service for offline players in March 2015 and has the likes of quick service restaurants, grocery stores and coffee stores on its platform. It has tie ups with Big Bazaar, Cafe Coffee Day and other players for the same.

Does this mean that offline channels are becoming important all over again? "We are not giving up on online. Since no other wallet company has as many merchants as we have in India, we are trying to replicate the online model in the offline space. Our objective is to become the largest platform of digital transaction," said Taku.

"Most transactions in India are happening via cash, people have always been going to a grocery store and coffee joint and paying with cash, we are changing that behavior, we are digitising the cash transaction into a digital transaction from the wallet," she added.

Founded in 2009 by Bipin Preet Singh and Upasana Taku , MobiKwik enables prepaid mobile, DTH and data card recharges, post-paid mobile bills payment and utility bill payment for electricity, gas and landline connections. It also offers these services via SMS, phone and apps that are available for Android, iOS and Windows platforms. The firm recently revamped its website and logo.

Talking about the average ticket size, Taku said there is no one size fits all approach.

MobiKwik claims that it has partnered with over 50,000 businesses across e-commerce, online food ordering, cab services and QSR chains in the country to offer digital wallets so that consumers can directly pay from their wallets while shopping online. Consumers can also make P2P money transfer using the wallet. Earlier this month, MobiKwik crossed the 10 million downloads threshold on the Android platform.

In April, MobiKwik had raised $25 million (over Rs 150 crore) in a Series B funding in a round led by Tree Line Asia, Cisco Investments, American Express. Existing investor Sequoia Capital, also participated in the round.