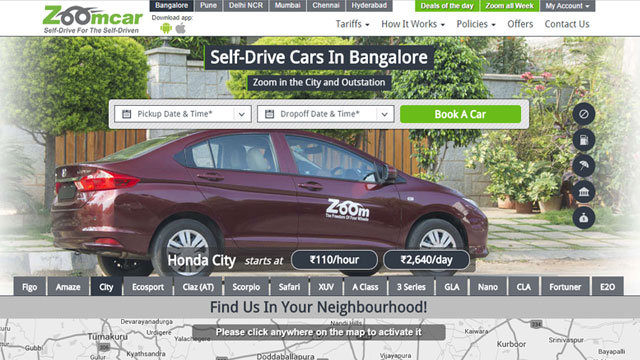 "We will use the funding primarily to add new vehicles, continue hiring, and continue to build out the technology and product on the back of successful recent product launches like our special Zoom Commute package for office goers who are looking for an economic weekday self-drive option," Greg Moran, co-founder & CEO, Zoomcar, said in a press statement.

Zoomcar says that its revenues have grown by over three times since the beginning of this year.

The company, which runs a membership-based service, currently has a fleet of over 1,500 cars across 250 pickup locations. It operates in Bangalore, Mumbai, Delhi, Pune, Chennai, and Hyderabad.

"Despite adding over 1,000 cars this year alone, we're still unable to meet the demand for our service with our current strength," added Moran.

Bangalore-headquartered Zoomcar was founded by two Americans David Back and Greg Moran as an India-focused venture under the US-based parent Zoomcar, Inc. It launched operations in Bangalore with seven vehicles in February 2013. Currently, the company operates vehicles such as Ford Figo and Ecosport, Honda City and Amaze, Mahindra Reva, Scorpio and XUV, Tata Nano and Safari, Maruti Ciaz and BMW 3 Series among others. It charges customers on an hourly or daily basis.

Zoomcar expects to add over 7,000 cars over the next year and plans to launch in 15 more Indian cities, Moran said.

In Oct 2014, Zoomcar raised $8 million in a round led by Sequoia Capital. In 2013, it secured $1.6 million in seed funding from New York-based Empire Angels and other investors.