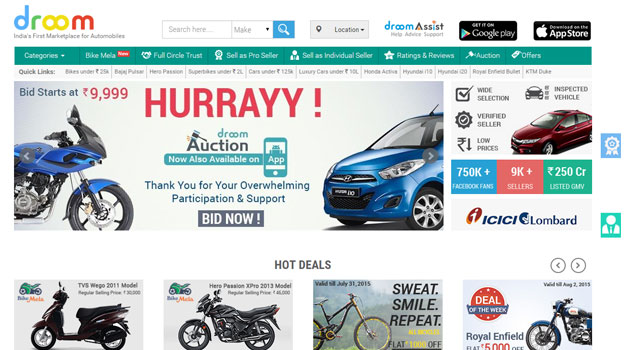 Droom will use the money to venture into Southeast Asia and for expanding its Indian operations.

"For our sellers, we provide low transaction cost, advanced online seller tools and scalable platforms. The recent investment from Lightbox and participation by our existing major investors allow us to aggregate the automobile industry at a scale which has not been achieved so far by anyone," Sandeep Aggarwal, founder and CEO of Droom, said.

Aggarwal launched Droom in April 2014. Droom is Aggarwal's second venture after Indian online marketplace ShopClues, which too was backed by Beenos.

Recently, Aggarwal made a personal investment in Shopsity Tech Pvt Ltd, a company that provides information on fashion products being sold by physical stores in the users' vicinity through an app.

The startup operates in 13 automobile categories. It claims to have completed over 3,000 transactions since its inception through the Android, iOS and desktop platforms. Droom has 85 employees in Gurgaon and Silicon Valley (the US).

"Droom is disrupting an industry where user behaviour hasn't changed since the advent of the internet in the country. The added bonus for us is that we have worked with Sandeep in the past, know what he's capable of building and excited to be along for another ride," said Sid Talwar, Partner at Lightbox.

The automobile market in India is worth $125 billion, making it the third-largest industry in the world with a demand for used vehicles spanning two wheelers to luxury cars. The pre-owned car market in India is worth $10 billion. However, 85 per cent of all pre-owned cars sold are sold through unorganised channels. It's estimated that about seven million used cars will be sold per year over the next 10 years in India.

In the online space, Droom, competes with players such as Truebil, Zoomo, CarDekho (which acquired Gaadi.com), Carwale and CarTrade in addition to horizontal P2P platforms such as OLX and Quikr.