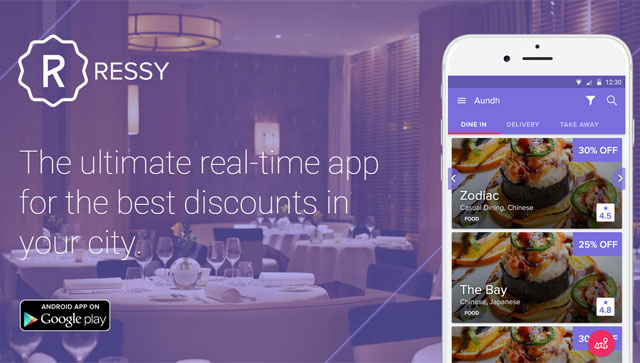 Mohandas Pai, chairman of Manipal Global Education and former member of Infosys' board; Akshay Garg, co-founder of Komli Media; Jeljo Joh Kottor, director, ProV Venture Investments (Singapore) and Ketharaman Swaminathan, founder of GTM360 were the other investors to put money in this round.

The Pune-based Ressy Technology Pvt Ltd, the firm behind Ressy, will use the money for product development and to bring over 1,000 merchants onto its network, as per a press statement. It will also use the funding to setup a sales and technology team.

"I have been on both sides of the table over the last 15 years as a former mobile Internet entrepreneur and an active angel investor. Ressy is one of those ideas that are so strikingly simple and obvious, you wonder why no one else has ever come up with it before. It has the potential to disrupt restaurant pricing models across the world.' Said Vikram Chachra of Eight Capital.

"Ressy's conception came about when, we noticed the prevalent trend within the food and beverage sector, wherein restaurants remained vacant on a few days and saw a surge of customers on few others. We wanted to create an app where the restaurants were able to attract customers when the need arose and be in control," said Rajepandhare.

The company has tie ups with over 500 restaurants in Pune.

Eight Capital Advisory Services Pvt Ltd is a private equity fund with approximately $250 million worth of assets under management.