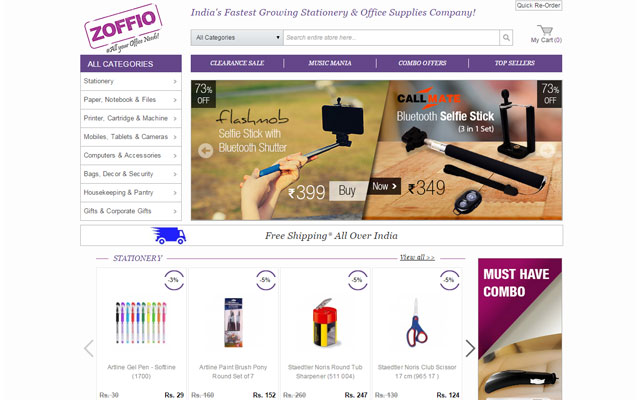 Bangalore-based Arcadia Technologies Pvt Ltd that runs online office supplies business under the brand Zoffio.com has initiated talks with venture capital firms to raise a $10 million (Rs 65 crore) Series A investment for the two-year-old e-commerce venture. The B2B e-commerce startup is part of Zuri Group that runs businesses in areas such as hotels, floriculture and energy across India, Kenya, the Middle East and the UK.

Founded by cousins Abhishek Kamani and Bobby Kamani, third generation entrepreneurs from the Kamani family who owns Zuri Group, Zoffio plans to expand operations as Amazonebusiness, global leader in online commerce of office supplies and Staple.in, the Future Group entity that operates under global major Staples under a brand licence agreement, step up operations in India. The company has mandated Veda Capital Advisors for the fundraise.

The home-grown online office supplies startups are at a fledgling stage in India. Chennai-based Kobster raised seed funding from Splice Ventures in February.

However, some including Brijesh Agrawal, co-founder of Tolexo, think the online B2B commerce that includes office supplies will be the next big wave in the Indian e-commerce industry after online B2C commerce hits a peak.

He said his firm, which delivers office stationery, furniture, gadgets and machines, posted Rs 3 crore net revenue in 2013. It grew to Rs 11 crore in 2014 and is poised to touch Rs 33 crore in the current year. The company delivers 15,000 orders of ticket size ranging Rs 1,500 to Rs 45,000 monthly across Bangalore, Delhi and Mumbai, according to Kamani. He counts TATA Communications, Dish TV, Yum Brands, Bharti AXA, GE and OnMobile among his 2.5 lakh customers.

"Having gained momentum, we expect Rs 2,000 crore revenue by 2021. We have warehouses in Bangalore, Delhi and Mumbai. Our plan is to open 14 more warehouses over five years," he said.

Kamani has put together a team of 150 led by a senior team that consists of people who worked in managerial positions in companies such as Snapdeal, Yahoo, etc. He said Zuri Group has so far invested over $5 million (Rs 32.5 crore) in building Zoffio.com.