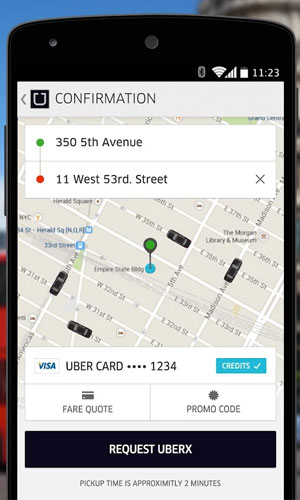 Starting with Mumbai, Bharti Airtel will also offer 4G internet access on Uber cabs to its drivers and customers.

"Our partnership with Uber is directly in line with our commitment to offer innovative and relevant services for our customers. We are excited that Uber has chosen Airtel to fulfil its telecom needs, and look forward to supporting the company's rapid growth across India", said Srini Gopalan, director â€“ consumer business, Bharti Airtel.

The San Francisco-based Uber also has a tie up with mobile wallet firm Paytm for cashless payments. Last month, it resumed accepting credit card and debit card payments in India by tweaking its app for the two-factor authentication (2FA) flow that the Reserve Bank of India (RBI) mandates for all card-based payments. Uber India also accepts cash payments in six cities.

Recently, the Reserve Bank of India allowed 11 entities (including included telecom players like Vodafone and Airtel) to set up payment banks.

As part the deal with Bharti Airtel, Uber will also give Airtel's mobile devices to its drivers for creating 4G Wi-Fi hot spots in the cabs. Airtel will also become Uber's official telecom partner across India and support the ride sharing app's growth by offering mobile, data and device plans to Uber's driver-partners.

Ola Cabs, Uber's biggest rival in India, had come up with a similar feature earlier this week when it launched 'Ola Select,' to a restricted set of customers. Ola Select offers a slew of benefits such as free wi-fi rides and free upgrades in addition to exclusive offers from partner brands such as Snapdeal, Cleartrip and Myntra.

In a recent interview with Techcircle, Eric Alexander, Head of Business (Asia) at Uber said that the company is growing at over 40 per cent on a month-on-month basis in India. Uber counts Bangalore and Kolkata as two of its fastest growing cities globally.

Uber is one the world's heavily funded startups. Marque names such as Fidelity Investments, Wellington Management, BlackRock Inc, Summit Partners, Kleiner Perkins, Google Ventures, Menlo Ventures, New Enterprise Associates (NEA) and Qatar Investment Authority among others have put money in the company. Uber was valued at $40 billion during its last round of fund raising.