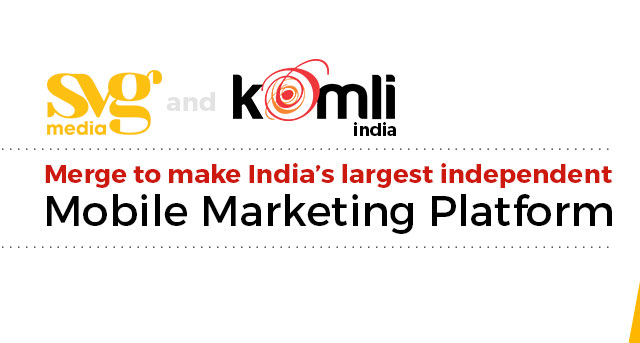 The combined entity will become the country's largest mobile marketing company and cater to 60 per cent of digital ad-tech spend in India, as per a press statement.

Komli India will operate as an independent unit along with other SVG Media entities such as Tyroo Technologies, DGM and SeventyNine. Once the transaction is completed, SVG Media's consolidated India revenue would stand at over $50 million, the statement added.

Around 100 Komli employees, spread across Bangalore, Chennai, Mumbai and Delhi, will join SVG. In addition, SVG will benefit from Komli's 500 odd clients, giving at access to 150 million Indian internet users across touchpoints, it said.

Started in 2006, SVG Media is a digital media network with a presence in India, Southeast Asia and the Middle East. The company serves businesses in over seven countries and houses performance, mobile and data targeting businesses such as Tyroo, PrecisionMatch and DGM. It counts Flipkart, Snapdeal, Amazon, Paytm, MobiKwik, Myntra, Jabong, Citibank and Standard Chartered Bank, among others, as clients.

In January, Techcircle.in had reported that SVG media was in talks for a large round of private equity funding and is targeting to list its shares in India within the next two years. In December 2014, the company had acquired mobile ad network SeventyNine and digital agency NetworkPlay from Gruner + Jahr, the publishing division of European media conglomerate Bertelsmann AG.

"Joining hands with India's largest digital marketing platform allows both of us to combine our best strengths to create unprecedented value for our customers. All of us at Komli India are excited to be a part of the SVG Media group and look forward to further consolidating our leadership in India," said Amar Goel, founder and CEO, Komli Media.

Komli is an ad tech company that offers solutions across display, mobile, video, social, search and data for advertisers, agencies and publishers. Its offerings include a real-time-bidding (RTB) performance advertising platform called ATOM that integrates audience data to improve return on investment.

Komli had made several acquisitions in the past, including that of Indoor Media, ZestAdz, Admax, Postclick and Aktiv Digital, in addition to taking over Jivox's video advertising business in Asia Pacific in 2012. It had also acquired the mandate for selling Twitter promoted products in India and Southeast Asia, Facebook's premium advertising products and Zynga's display ad and video inventory in India.

Earlier this week, Komli spun out its integrated cross-channel CRM platform RevX into a separate company to focus on app re-engagement opportunities globally.