SoftBank leads $1B Series E round in US-based SoFi 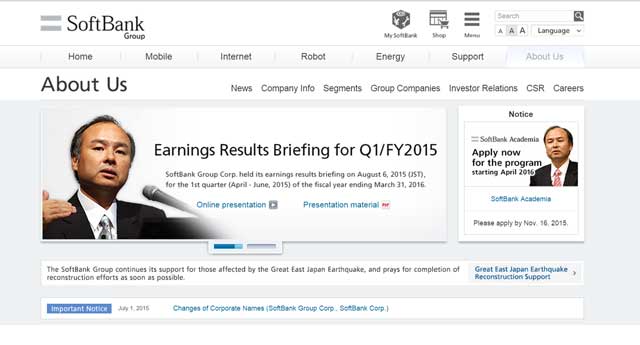 Japanese telecom and internet giant SoftBank Group Corp has led a $1-billion Series E investment round in US financial technology startup SoFi, according to a press release.

This is one of the biggest deals in the financial technology sector and takes the total equity investment in the lending marketplace SoFi to $1.42 billion. The deal comes at a time when the segment has attracted many private equity and venture capital investors in India as well.

In August, Bangalore-based Scripbox.Com India Pvt Ltd, which runs online fin-tech portal Scripbox, secured Rs 16 crore ($2.49 million) in its Series A round of funding from Accel Partners and a group of angel investors. Prior to that, New Delhi-based IndiaLends raised an undisclosed amount in a pre-Series A round led by DSG Consumer Partners and angel investors including Siddharth Parekh.

Mike Cagney, CEO and co-founder of San Francisco-based SoFi, said the funding will advance expansion of the company's products and experiences. "Our trajectory is clear: we are well on our way to becoming the most trusted financial services partner in the US," he said.

SoFi offers mortgages, mortgage refinancing and personal loans. It has funded more than $4 billion in loans to date and expects to surpass $6 billion by the end of 2015. It has around 400 employees.

"This investment gives SoftBank exposure to the financial services sector, which is one of the largest and most important industries in the world," Nikesh Arora, President and COO of SoftBank.

Arora had joined SoftBank from Google last year as vice-chairman with direct responsibility of SoftBank Internet & Media Inc as its CEO. Recently, he invested Rs 3,147 crore in SoftBank.