E-commerce giant Amazon.com, Inc has reported 23 per cent increase in net sales to $25.4 billion for the third quarter ended September 30, 2015.

Amazon, better known for reinvesting cash and growing its business instead of assuaging investors through quarterly profits, has now booked profit for the second consecutive quarter. 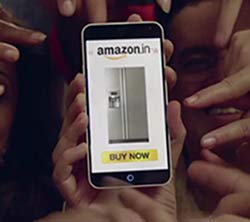 Amazon Web Services (AWS) was again a top performer for the company. Revenue from AWS grew 78 per cent to $2.08 billion on a year-on-year basis. As per Quartz, AWS has now generated almost $7 billion in sales over the past four quarters.

North America, which grew 28.2 per cent, led geography-wise growth. International sales grew by just 6.5 per cent, partly affected by forex fluctuations, which had an adverse impact of $1.3 billion on the company's numbers.

It anticipates operating income of anywhere between $80 million and $1.28 billion.

Amazon continues to be bullish on its India operations.

In the third quarter, active customers on Amazon.in grew over 230 per cent year-over-year.

Amazon India claims to have added about 40,000 new products (on an average) everyday in calendar 2015.

Over the last year, Amazon.in has seen a 250 per cent growth in sellers, the company claimed. To serve this growing storage need, Amazon.in has nearly tripled its fulfillment capacity year-over-year.

Nearly 90 per cent of Indian sellers are using Amazon's logistics and warehousing services.