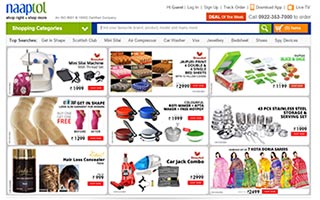 Naaptol Online Shopping Pvt Ltd, which runs TV shopping and e-commerce platforms, said on Tuesday it has raised Rs 343 crore ($51.7 million) in a new round of equity funding from existing investor Mitsui & Co.

The deal increases the Japanese conglomerate's stake in the Indian company to almost 20 per cent from 5 per cent, and values Naaptol around Rs 2,177 crore ($328 million) post money.

Manu Agarwal, founder and CEO of Naaptol, said the company will use the funds to expand its reach and build an efficient supply chain. It will also use the money to upgrade its studio capabilities to churn out more content in multiple languages and invest in technology, he said.

"We are at an inflection point where transformational use of technology and expertise will define our future," he said.

Naaptol, which was founded in 2008, claims to reach 160 million TV households in India. It also claims to process 20,000 orders a day.

Naaptol had raised  Rs 136 crore ($21.4 million then) in April this year in its Series C investment round from New Enterprise Associates (NEA), Canaan Partners and Silicon Valley Bank, along with Mitsui. It had mobilised $25 million in Series B funding led by NEA in 2011, followed by a top-up round of $7 million in 2013.

The company went through a rough patch last year when it was pulled up for alleged false advertising by Advertising Standards Council of India (ASCI) in May 2014. A few months later, its bank accounts were frozen after the company failed to pay Value Added Tax on the sale of third-party goods. Agarwal said the controversies had no impact on the company.