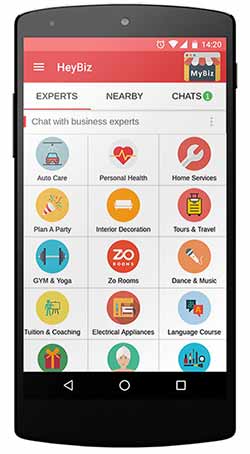 Horizontal e-commerce marketplace ShopClues has invested an undisclosed amount in mobile app HeyBiz, which enables real-time chat between companies and their target audience.

Delhi-based Techlites Solution Pvt. Ltd, which runs the app, will utilise the money for product development and expanding into newer geographies such as Chandigarh, Amritsar, Ludhiana, Lucknow and Jaipur.

"With the capital infusion, we are confident that we are one step closer to realising our goal of making HeyBiz the market leader in the sales-marketing-support platform for our businesses and the one-stop mobile shop for our users," said Bhartesh Chhibbar, founder and CEO, HeyBiz.

Launched in January this year, the application is available on both, Android and iOS platforms and facilitates users to search, connect, follow, chat and get the queries answered from nearby businesses or services without sharing their mobile number. The companies can also update users with upcoming sales, promotions or new service launches in just a few clicks.

"In this digital era, we are glad that someone is there to bridge the chasm between customers and local businesses. In HeyBiz, we saw the potential to become the one-stop platform to mend this gap," said Sanjay Sethi, CEO and co-founder, ShopClues.

Founded in July 2011 in Silicon Valley, ShopClues claims to list 3.5 crore products and over 3 lakh merchants. ShopClues is the Indian subsidiary of Clues Network Inc., a US company and is based out of Gurgaon.

Earlier this year, the company, which has 900 employees, raised $100 million (Rs 620 crore) in Series D funding led by Tiger Global.