The IT sector has been a key driver of private investment as well as merger and acquisition (M&A) deals in the country over the years and this year was no different. Indeed, preliminary data collated by VCCEdge, the research platform of VCCircle, shows that dealmaking in 2015 got even more concentrated in the technology sector at large.

Close to two in every three private investment transactions in the country - be it angel, venture capital (VC), private equity (PE) or private investment in public enterprise (PIPE) deals - were in the IT sector and the sector gobbled up around a third of total private capital flow into India. The volume spike is largely representative of a surge in angel and VC deals in tech startups.

The number of fundraising deals in the sector nearly doubled to 843 this year with total deal value rising almost 30 per cent to $7.49 billion.

Even though the big boys of Indian e-commerce, Flipkart and Snapdeal, raised substantially less amount this year compared with last year, the overall deal value as well as transactions steadily increased as another set of companies including Ola and Paytm conducted big funding rounds. Taxi aggregator Ola, for instance, raised $902 million this year, the most by any company. 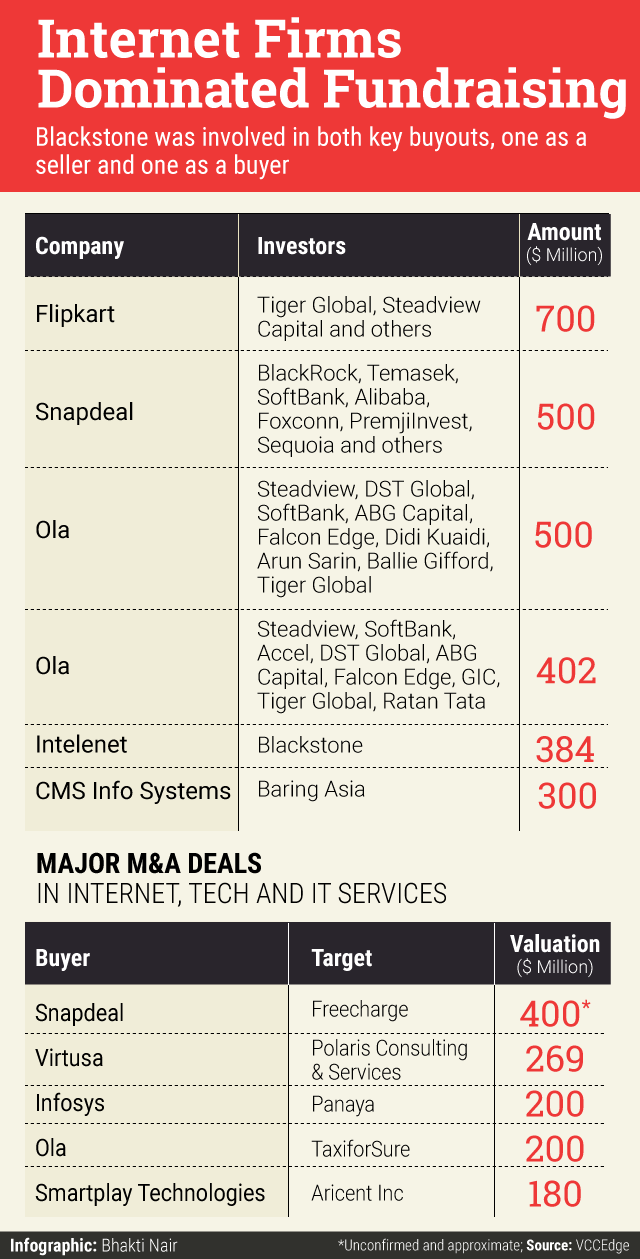 The number of M&A deals in the sector rose to 259 from 178 last year but the total deal value fell to $2.43 billion from $2.89 billion in 2014 when TCS merged unit CMC Ltd with itself for half a billion dollars.

The consolidation drive in the Indian internet space that was set in motion last year with Flipkart buying Myntra gained momentum this year. Ola bought rival TaxiforSure while Snapdeal enhanced its product offerings through the acquisition of Freecharge. Meanwhile, a number of strategic deals in hyperlocal, food-tech and real estate listing segments are on cards; Quikr's impending deal with Commonfloor is a case in point.

Major IT services players, too, showed some aggression in buying assets. Infosys, which has a cash reserve of $5 billion, made a number of acquisitions including that of Israeli company Panaya and US-based Kallidus for $200 million and $120 million, respectively. Its cross-town rival Wipro acquired US financial service solutions company Viteos Group for $130 million last week.