Fisdom gets $500K from Rob Chandra, TaxiForSure founders & others 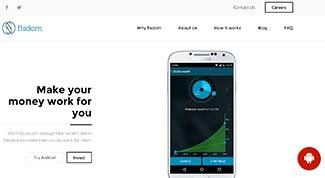 Rob Chandra was the general partner heading the India investments at Bessemer Venture Partners till July, 2012 before he opted for a part-time role. He exited Bessemer in June 2015 to focus on a hedge fund called Avid Park Capital he set up in the US.

"The funding that we have raised will be utilised to enhance the technology team and will also be spent on marketing," Subramanya S.V., co-founder, Fisdom told Techcircle.in.

"This is for people who are not financially savvy, have money but end up investing in gold, real estate and fixed deposits. This is an easy way for people to invest in capital markets," he added.

The Economic Times had first reported the development.

Fisdom was co-founded by Subramanya S.V, Ramganesh Iyer and Anand Dalmia in September 2015. Subramanya was the former MD of VC firm Bessemer Venture Partners and is also an angel investor. He has invested in startups including DailyNinja, Cartisan and Goodbox.

Iyer was an investment manager with Peepul Capital Advisors and Dalmia was with Macquarie Capital India before starting Fisdom.

It is planning to serve 5,000-10,000 customers by the end of 2016. The company will also be launching stocks, bonds and equity products in the future.

In August 2015, Bangalore-based Scripbox.Com India Pvt Ltd, which runs online fin-tech portal Scripbox, had raised Rs 16 crore (around $2.49 million) in its Series A round of funding from Accel Partners and a group of angel investors.