Hike claims to have over 100M users 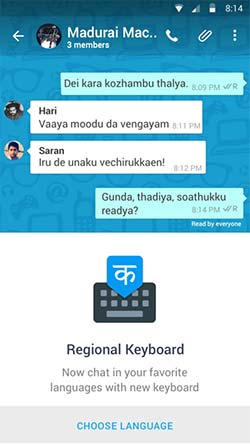 Hike, the instant messaging app backed by Bharti Softbank (BSB) - the joint venture between Bharti Group and Japan's Softbank, claims to have crossed the 100-million-user mark, and is now logging a monthly messaging volume of 40 billion.

The app, which was launched in December 2012, has achieved the milestone in just three months after crossing 70 million users in October 2015. And, 90 per cent of Hike users are under the age of 30 and 90 per cent of them are based in India.

"Crossing 100 million users is a milestone for us and we have achieved this magic number well ahead of our expectations. This huge user base is not only messaging and calling on Hike, but is reading News on Hike in Hindi and English, viewing live cricket scores, getting inspired on Hike Daily, transferring huge files without internet on Hike Direct and so on," said Kavin Bharti Mittal, CEO and founder, Hike Ltd, in a statement. "This fast growing user base will now fuel our next growth phase."

Founded in July 2012 by Mittal, who is the son of Bharti Enterprises chairman Sunil Bharti Mittal, Hike is a peer-to-peer (P2P) messaging app that uses both data and SMS to deliver messages. It has released a number of new features in the recent past that include Hindi news bytes, stickers in 30 languages, group calling, group chat for up to 500 members and 100 MB file sharing. Hike is globally available on iOS, Android, Blackberry, and Windows.

A few month ago, Hike announced a new feature that enables users to share files without an internet connection in a 100-metre radius. It recently appointed Unilever executive Hemant Goyal as vice president of finance and Amazon's Gautam Vohra as its general counsel.

Operating in the highly competitive messaging app segment, Hike competes with market leader WhatsApp and others including Facebook Messenger, Viber, Google Talk, China's WeChat, Japan's Line and Nimbuzz in India. WhatsApp has 900 million users globally, with India accounting for a big chunk of its user base. According to a report by research agency TNS, WhatsApp is the most used instant messaging app in India with 56 per cent of the country's internet population using the messenger service.