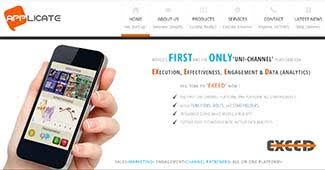 Applicate IT Solutions Pvt Ltd, that offers solutions for sales, marketing and distribution besides data analytics and enterprise communications, has raised $1 million (around Rs 6.8 crore) in angel investment from a group of high net worth individuals (HNIs).

The Bangalore-based company will use the new capital to further develop Trade GINI â€“ its mobile based e-commerce platform for offline retailers and online sellers, it said in a statement. The product is currently being used by more than 4500 retailers who are interacting with more than 130 suppliers across categories and companies to place their orders through the app. Trade GINI, which was launched in August last year, counts Kelloggs, Britannia, Marico and MTR as its partners.

The company aims to achieve an average daily revenue of Rs 1 crore in the next six months. "We are doubling our revenues every week. With the planned scale-up in NCR and other cities we will cross an average of Rs 1 crore of profitable revenue (not GMV) before the end of first half of 2016, " said Deepak Rewadi, one of the co-founders and head of operations at Applicate.

In May 2015, the company had raised Rs 3.5 crore ($550,300) from a dozen high-net-worth individuals (HNIs), which included Vishal Chaddha (HT Media's marketing head) besides Vasudev, Nayan, and Mishra. The company was founded in 2014 by former Coca-Cola executives Ranjeet Kumar and Deepak Rewadi.

In the same market, Just Buy Live, an e-distributor that connects shopkeepers with consumer brands and distributors, has raised $20 million (around Rs 136 crore) in Series A funding from Alpha Capital last week.