With the launch of the two new tools, the ad tech firm has completed its product offering in the space of programmatic advertising. The company has launched the new tools after a gap of one year. In November 2014, Vdopia had introduced programmatic buying and selling marketplace under the brand Chocolate for mobile video advertising in India.

"We have integrated Nielsen digital ad ratings in the two new tools along with the existing tool â€“ Chocolate marketplace. This allows both publishers as well as advertisers to slice and dice their audience base depending, on location, age and various other preferences," says Saurabh Bhatia, CEO, Vdopia.

Bhatia adds that the marketplace, which the company had launched in 2014, is an open place which allows publishers to auction their ad inventory and advertisers to buy it. "With the usage of the new tool, now advertisers can also push native video content on a publisher's mobile site or application," adds Bhatia.

Chocolate uses Vdopia's proprietary VDO technology which enables advertisers and publishers to seamlessly run video-enabled ads on the mobile web and apps without Flash or plug-ins. 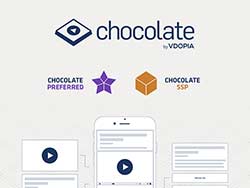 As per Bhatia, it takes about a year to develop a new product, especially in the domain of mobile advertising.

As per the annual Pitch Madison Media Advertising Outlook (PMAO), digital advertising is expected to grow by 30 per cent to reach Rs 6,656 crore by the end of 2016. The medium showed 29 per cent growth in 2015 on the back of demand for video, social and mobile. The report states while ad spends on search is likely to stabilise, display advertising on desktop will see a drop. Programmatic buying, which saw some traction in 2015; is likely to further strengthen in 2016.