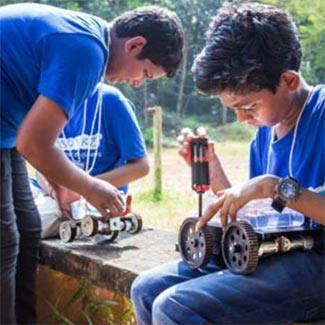 The angel funding round was led by IAN member and founder chairman of Native Angels Network Nagaraja Prakasam and The Chennai Angels Network.

Prakasam will be joining the board of the company.

The startup conducts robotic classes for school and college students. It plans to use the new capital to set up more knowledge centres and start video tutorials on its portal.

"Knowledge centres will also be set up in prime locations to provide special training and act as a common place where the kids can spend any amount of time to collaborate, work, experiment and get free guidance from our technical team," Sneha Priya, co-founder, SP Robotics, told Techcircle.in.

The company has two offerings â€“ Kidobotikz for students in the 12-17 years age group and Rovateclabs for young adults who want to take up robotics as a hobby. It also offers courses in electronics, embedded systems, and PCB designing.

The digital version of a part of its course-ware will be soft-launched in Chennai in a few months.

Solaron SP Robotics is Prakasam's 13th investment through IAN. He has also led deals in Uniphore, GoCoOp, Freshworld and Saahas.

According to VCCEdge, the data research platform of VCCircle, IAN has invested in nine companies in 2016.

In the same month, IAN backed Roadhouse Hostels Pvt Ltd, which runs a chain of hostels targeted at backpackers. In January, it invested in DesignBids, a Delhi-based project discovery platform for architecture and interior design services.