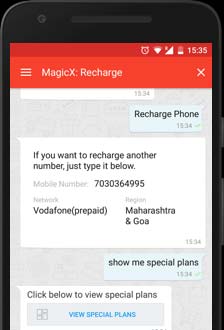 The funds raised will be used for team expansion, marketing initiatives, addition of more service categories and technology upgradation.

MagicX is also in talks with four venture capital firms to raise $5 million in a Series A round, a company statement said.

Conversational and chat enabled commerce is touted to be the future of e-commerce. Not surprisingly, quite a few startups have sprung up in the last few months and some of them have seen investor traction.

"Bots and artificial intelligence are the next frontiers in technology. I am excited to back this team which is working in cutting-edge technologies," said Kris Gopalakrishnan, co-founder and former vice chairman and CEO of Infosys.

Currently available only in the Android platform, the chat enabled platform has tied up with about 20 partners across e-commerce, bill payments, recharges, groceries, travel, etc. The app claims to have witnessed more than 10,000 downloads.

"With the addition of newer categories such as food, travel and e-commerce, as well as targeted marketing, MagicX aims to be the largest conversational commerce company in India," said Prasanna.