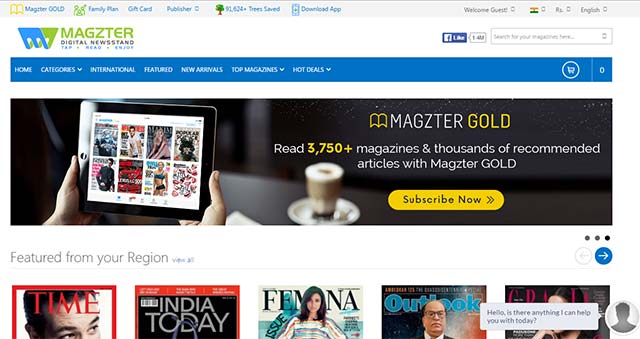 Digital magazine startup Magzter Inc is raising a third round of funding and also rolling out new revenue streams. The New York based company's co-founder and president Vijay Radhakrishnan said the fresh funds will be used to enter new markets in Latin America and Southeast and Far-east Asia.

Under the new revenue streams, the company will bundle and sell stand-alone articles or content. "There are times when a person just wants to read a single article yet she is forced to buy the magazine. Hence we would bundle and sell articles of same genre," Radhakrishnan said.

Magzter plans to launch this service by October-November this year.

Radhakrishnan claimed that the startup currently has 1.6 million paid subscribers on the platform.

Additionally, Magzter has introduced Magzter Ad Network, to earn advertising revenue from the app. With this, the company has opened up advertising inventory on the platform. The new network allows to insert interactive advertisements consisting of audio-visual content.

The startup has tied up with its strategic investor Singapore Press Holdings Ltd (SPH) to manage the ad-sales in Southeast Asian countries. According to Radhakrishnan, the startup is looking at inking similar ad-sales deals in other countries, including the US and the UK.

"We will be replicating the Google AdSense model on the platform. To do that one needs to have a bunch of publishers on the platform, which Magzter already has. Hence monetising the platform is easy," said Joseph Lee, managing director, new media, SPH.

Google AdSense allows website publishers to earn money by displaying Google ads on their website's content pages. The ads are related to what users are looking for on the site.

Radhakrishnan said the company is aiming to earn advertising revenues of $100 million in the next three years globally.

The cost of inventory on the platform will vary depending on the premium nature of the content. For example, advertising in a regular magazine is expected to cost $200 per page, while a full-page ad inventory in a luxury magazine will come at a price of $700.

According to Radhakrishnan, the price will change depending on the kind of readership a magazine is able to generate.

Interestingly, with the roll-out of the ad network, the company is also looking at folding up MagEnhance, a service which it had launched in December 2014. The service allowed publishers to digitise their in-print campaigns and scale them across web and mobile. However, Radhakrishnan said MagEnhance's future also depends on the performance of the ad network. "If the ad network picks up, we may stop this service completely," he said.

In addition to adding new revenue streams, Radhakrishnan will focus on advertising and promoting the brand Magzter in the online world.