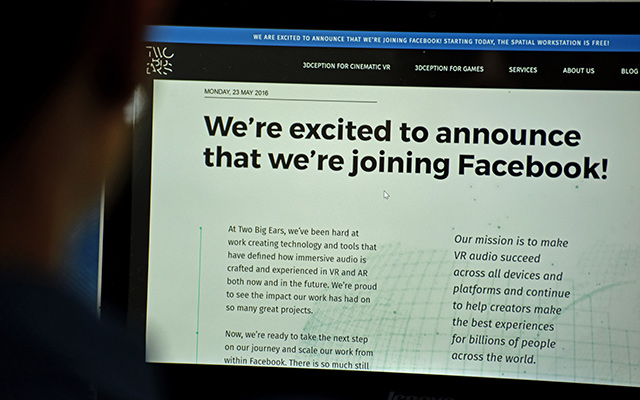 Facebook has acquired Edinburgh-based company Two Big Ears that specialises in spatial 3D audio in cinematic and gaming experiences, as part of its bid to realise its virtual reality (VR) ambitions.

The social network company, which owns VR major Oculus, will make Two Big Ears "3Dception" technology free for developers as part of its new "Facebook 360 Spatial Workshop", according to a TechCrunch report.

"Further progress in building hyper-realistic 3D audio is a major get for Facebook video and the Oculus platform," the report said.

"Starting today, our pipeline for cinematic VR and 360 video, including the authoring tools, encoder and rendering engine are available for free. We're excited to be able to continue developing great tools for a larger number of people across the world... 3Dception for Games will no longer be a separate product but we will be working with the Oculus team to combine our expertise and create best in class VR audio. Existing Pro customers will continue to receive support in accordance with your current agreement with Two Big Ears for the next 12 months.," Two Big Ears said in a blog post.

Two Big Ears, which was founded in 2013, focuses largely on how sound plays in 3D spaces and how it interacts with surfaces that surround the viewer.

Building hyper-realistic 3D audio is important for Facebook video and the Oculus platform. Both the Gear VR and Rift support the immersive audio technology and the fact that Facebook is opening up Two Big Ears' 3Dception technology for free to developers is a nice move to keep content creators happy, said TechCrunch. Two Big Ears had two immersive audio products based on solutions for both cinematic VR and gaming. While the cinematic VR product has now morphed into the Facebook 360 Spatial Workstation, Two Big Ears will work with the Oculus team on a way to integrate the gaming software.