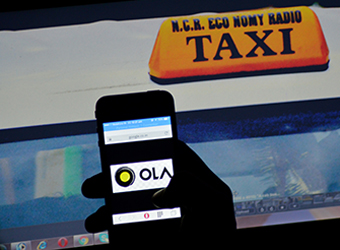 Homegrown urban transport aggregator Ola has launched a new app for the operators on its platform.

The new app â€“ called Ola Operator â€“ will help the cab aggregator add new operators, including driver-partners who have turned entrepreneurs, operators in the business of transportation as well as aspiring first-time entrepreneurs who would like to be part of the mobility ecosystem with minimal time commitment, onto its platform.

The app will also help operators manage their single vehicle/fleet with real-time tracking and performance. Operators can monitor log-in details, daily earnings and performance in real time from a single window. The app dashboard will display details about the operator's current balance, total number of rides completed and earnings, along with cash and online payments break-up for the selected period, at a vehicle- and driver-level. The app will also act as a repository for requisite documents including vehicle registration, driving licence and insurance papers.

"The Ola Operator app makes it possible for entrepreneurs across scale and size, to access and control their business on the Ola platform in real time, with the flexibility and convenience to operate from wherever they are," said Sumit Tuteja, senior director of product, Ola, in a statement.

Ola, run by Mumbai-based ANI Technologies, has been expanding its scope of services and offerings when it comes to addressing urban transportation problems. Recently, Ola shut down its grocery delivery and food delivery service.

Last week, Techinasia reported that Ola is all set to launch a new post-paid billing service as early as next week, called Ola Exclusive, which will work on a subscription-based model, allowing users to pay for car rides at the end of a billing cycle.

In April, Ola added electric rickshaws or e-rickshaws on its mobile app as part of the 'Stand up India' initiative with Prime Minister Narendra Modi taking the first ride in Noida.

Since February this year, Ola has added Ola Micro, a pocket-friendly taxi service, across seven cities. The segment's base fare is in the range of Rs 35-45 and Rs 6-7 per km after the minimum distance, based on the city of operation.

Founded in January 2011 by IIT Bombay alumni Aggarwal and Ankit Bhati, Ola allows users across 102 cities to book from more than 275,000 cabs and 75,000 auto rickshaws on its platform. It aims to enroll one million drivers on its platform in three years. It has more than 100,000 drivers, a number that has grown from 10,000 a year ago. Ola completed its Series F funding round in November by raising $500 million from Scottish investment firm Baillie Gifford and China's Didi Kuaidi, besides some existing investors. In early 2015, Ola acquired TaxiForSure, India's second largest cab aggregator, which continues to operate as an independent brand.