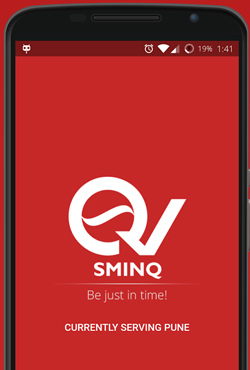 Angel investor Vaibhav Domkundwar also put money in this round, the company said in a statement. Suresh Shanmugham, co-founder and managing partner at Saama Capital, will join the company's board.

The startup will use the funding to get more services on the app and improve its technology offering.

Sminq was founded in July 2015 by Santhosh Nagarajan, Sheldon D'souza and Shachin Bharadwaj. Bharadwaj and D'souza had earlier co-founded online food delivery startup TastyKhana.com, which was acquired by Foodpanda in November 2014.

The app gives real-time information on queues at places such as doctors' clinics and does away with the need to be physically present to hold one's spot. The company plans to build a visibility search engine which will enable users to book appointments across various businesses.

"We have been in the market for close to year now, and see a very good product market fit for Sminq. We are already generating revenues and have seen great traction when it comes to user engagement with the app," said Bharadwaj, who is also the company's CEO.

Sminq claims to have about 40 paying doctors using the app for their clinics in Pune. The company charges a fee to be listed on Sminq and claims to drive 6,000 user bookings a month for clients.

Blume Ventures is among the more active early-stage venture capital firms in India. It recently marked the third close of its second VC fund. It has invested in more than a dozen companies in 2016, including co-working space BHIVE, tech startup Servify, ed-tech firms Unacademy and wedding solutions portal The Wedding Brigade.

Saama Capital recently raised $30.3 million under its third fund. It has invested in around half a dozen firms over the past year, including beverages firm RAW Pressery, tea chain Chai Point and Veeba Foods, besides some tech ventures like EazyDiner, Bluestone, Lendingkart and Naaptol.