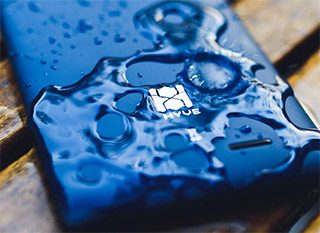 While Hyve Buzz is priced at Rs 13,999, Hyve Storm comes with a Rs 8,499 price tag. The smartphones will be available on Flipkart, Amazon and Gadgets360.com from June 22.

Both the dual SIM smartphones will run stock Android 5.1 Lollipop, and an Android Marshmallow update has been promised.

Featuring the new USB Type-C reversible connector with fast charging, the Buzz boasts a 2500mAh TrueLife battery that claims to offer 15 hours of talktime on 4G and up to 22 days of standby time. The water-resistant smartphone has a rubber back and a rear fingerprint sensor. The phone's highpoint is a fingerprint-based sensor that comes with the patented Touch2Call technology allowing users to make calls to pre-set numbers with a single touch.

On the other hand, the budget smartphone Hyve Storm has a 5-inch HD display and is powered by MediaTek 1.3GHz quad core processor. Besides featuring 13MP rear camera and 5MP front camera, the smartphone has a metallic look and comes with 2GB RAM, 16GB storage, and 2000mAh battery.

The startup claims to have set a benchmark on the services side. It has rolled out Hyve Care, its customised service play, which offers extended warranty and complimentary insurance for the first year with these devices. It also offers IVR-free call centre support and complimentary pick-and-drop service. Hyve Buzz will come with a two-year manufacturer's warranty, while Storm will boast a warranty of one year.

"It is aimed at offering smooth and easy servicing of the device which also includes pan-India pick-and drop. Service is something which can change the game in the Android space," said Mehrotra.

Hyve Mobility aims to sell one million devices over the next one year. It is also looking to launch a new product four to five months later, during the festive season.

Hyve will be the latest entrant in an extremely crowded market. India's smartphone shipments in 2015 grew 28.8% to 103.6 million units, positioning the country as one of the fastest growing smartphone market in Asia Pacific, according to the latest report by International Data Corporation (IDC). In the first quarter of 2016, 4G based device shipments accounted for 65.5% of overall smartphone shipments. This sharp rise in the share of 4G smartphone is due to the cohesive move from the entire ecosystem, according to the market research firm.