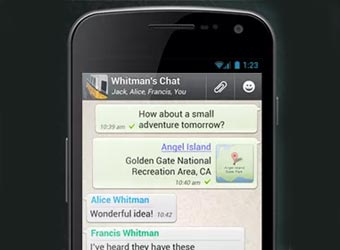 The Supreme Court on Wednesday dismissed a petition seeking a ban on messaging app WhatsApp.

A public interest litigation (PIL) filed by a Haryana-based Right to Information (RTI) activist Sudhir Yadav had claimed that WhatsApp and other messaging apps were helping terrorists by encrypting the messages, thus endangering national security and should therefore be banned.

Dismissing the PIL, the Supreme Court asked Yadav to approach Telecom Disputes Settlement and Appellate Tribunal (TDSAT) with the petition.

The petition had said that terrorists can easily chat on WhatsApp and make plans which are impossible to access even by supercomputers as decrypting a single 256-bit encrypted message would take hundreds of years.

"Even if WhatsApp was asked to break through an individual's message to hand over the data to the government, it too would fail as it does not have the decryption keys either," Yadav said in his petition.