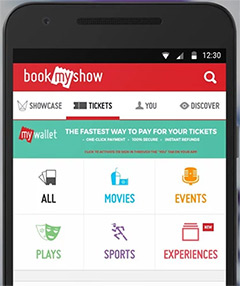 Movie ticketing platform BookMyShow has raised Rs 550 crore ($81.5 million) from existing and new investors in one of the largest funding rounds for an Indian consumer Internet firm in recent months.

This round takes the total amount the company has raised to $128 million (Rs 863 crore), making it one of the most heavily funded firms in the media and entertainment sector. The company last raised $25 million (Rs 150 crore) from SAIF Partners, Accel Partners and Network18 in 2014.

Ashish Hemrajani, CEO and co-founder of BookMyShow, said the company will use the new capital toward rolling out "exclusive entertainment experiences" on BookMyShow and enhancing the overall offering for users.

BookMyShow also intends to enter new international territories such as Indonesia, according to a statement on the website of Stripe Group. The US-based firm typically invests $10-100 million in Internet, software, healthcare IT and branded consumer products businesses, its website shows.

BookMyShow, launched in 2007, is an online platform that allows users to book tickets for movies, plays, sports and live events. It is now present in about 350 towns and cities across India. In March, the company acquired a majority stake in Chennai-based fan relationship management solutions provider Fantain Sports Pvt Ltd.

Bigtree Entertainment is one of the better-positioned consumer Internet firms in India, where many others have burnt cash heavily and resorted to discounting to lure customers in a bid to grow. The company posted net sales of Rs 127.63 crore and net loss of Rs 13.5 crore for the year through March 2015, according to VCCEdge, the data research platform of VCCircle.