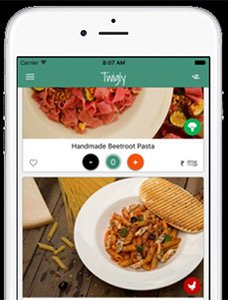 The startup will use the funds for marketing and expansion to Delhi and Bangalore, it said in a statement.

Twigly was co-founded by Sonal Minhas, Rohan Dayal and Naresh Kachhi in 2015. Minhas is an alumnus of IIT Kanpur and holds an MBA from ISB. Previously, he was VP at SAIF Partners.

Dayal is an IIT Delhi and ISB alumnus and earlier co-founded Wandership. While Kachhi holds bachelor's and master's degrees in computer science from IIT Kanpur and worked with Kiwi and Intel earlier.

The company, which operates through a centralised kitchen, offers a selection of sandwiches, riceâ€curries, pastas, salads, shakes and smoothies in Gurgaon. The menu is limited and curated regularly. Chefs are recruited after a live demonstration of their culinary skills.

Twigly claims to have a user base of 6,000 customers and aims to scale to $100 million in sales within eight years. It currently delivers 150 orders a day with an average ticket size of Rs 450 and plans to deliver 1,000 orders in the next seven months.