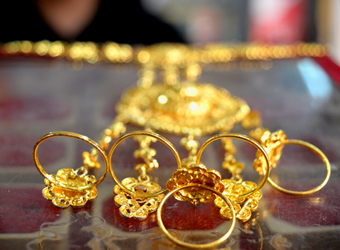 AuGrav, a Coimbatore-based startup that designs and sells personalised precious jewellery to end-customers and retailers, is in talks with the Chennai chapter of global angel network Keiretsu Forum and others to raise close to $450,000 (around Rs 3 crore) in seed investments.

The startup wants to invest the capital to expand its team and strengthen its marketing efforts and research initiatives, Vivek Krishna, founder of AuGrav, told Techcircle.in. Those with whom the firm is in talks include a few South India-based high-net worth individuals (HNIs).

Owned and operated by Krizda India Pvt Ltd, AuGrav was launched in October 2014 by Krishna and underwent two pivots before transforming into a 3D printed personalised gold jewellery brand. It was launched as a plain gold Jewellery e-commerce company and later changed its business model to be a marketplace or an aggregator for jewellery for a short period.

Krishna worked with General Sentiment and IBM in the past.

Deeply funded Bluestone and Caratlane are the leaders in the Indian online jewellery market. Over the past five years, Caratlane has raised about $50 million from Tiger Global while Bluestone secured a little less than half that amount from investors including Accel Partners, Kalaari Capital and Tata Sons chairman emeritus Ratan Tata.

In May this year, Titan Co Ltd, Tata Group's watch and jewellery retailing firm, struck a deal to buy a majority stake in Caratlane while according to a recent report by Mint, Bluestone was in talks with some existing investors and venture capital firm Iron Pillar to raise Rs 200 crore (over $30 million).

US-based cross-border angel investor network Keiretsu Forum has got off to a good start in India with its first chapter in the country in Chennai, finishing its first year with almost a dozen deals. The chapter, which came into being in January 2015, has invested a little over $1 million (around Rs 6.8 crore) in these early-stage companies. While five of the companies are based in India, six companies are based in the US.

Keiretsu Capital, the co-investment fund of Keiretsu Forum, raised around $6.5 million for its first angel-investor fund in 2015. It is now planning to start a seed fund in India.

Keiretsu Forum is an invitation-only platform. In the US, it admits those with an annual income of $200,000 which is the US Security Exchange Commission's criteria for accreditation. Though no such norms have been set for India, the local chapters in India largely follow the same rule in enrolling members.

Keiretsu globally has 40 chapters with around 2,000 members and is arguably one of the largest angel networks in the world. Besides Chennai, it has a chapter in Bangalore and is looking to expand to other regions in the country.

ike this report? Sign up for our daily newsletter to get our top reports.