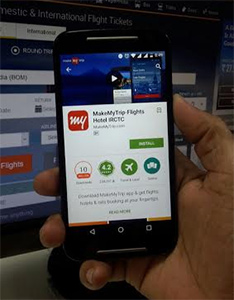 The NASDAQ-listed firm's net revenues rose to $58.86 million fuelled by 80.8% (89.8% in constant currency) rise in net revenues from the hotels business. Hotels & packages unit generated over half of the net revenues.

"Our first quarter for fiscal 2017 achieved a terrific 478% year-on-year transaction growth in our standalone online hotels business, representing over 91% of all hotels and packages transactions in the quarter. This robust growth has also helped us achieve record quarterly bookings and revenue less service costs for our company," said Deep Kalra, group chairman and group CEO.

MakeMyTrip, which is lodged in a pitched battle with Naspers-controlled Goibibo in the OTA business and especially in the hotels booking business, said it recorded almost four-fold jump in number of hotel booking transactions. The number of hotels and packages bookings rose from 430,100 in Q1 of FY16 to 1.5 million in the quarter ended June 30, 2016. In the same period, the number of air ticketing transactions rose 34% to 2.15 million.

"We remain optimistic of the long term business growth opportunities that are presented by India's low penetration in the online hotels market as well as the growing domestic aviation market. Based on the strong first fiscal quarter's high revenue less service costs achievement and the continuation of our high growth strategy to increase our India standalone online hotels market share, we are improving our outlook for year on year," it said.

Besides Goibibo, MakeMytrip competes with the likes of Yatra, Cleartrip, Via, Musafir and other online travel agencies in India. Early this month, Yatra.com said it is looking to go for a reverse merger with a NASDAQ listed blank cheque firm that would allow it to go public in the US.