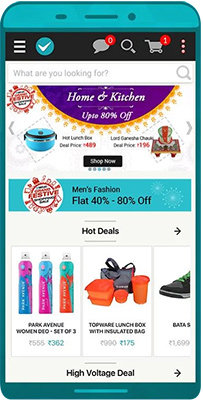 E-commerce firm focusing on non-metro markets Shopclues is building a slew of services targeting half a million merchants, mostly micro and small businesses, who sell on its marketplace as it targets one-third of its revenues from outside sale transactions on the website in 18-24 months.

"We are betting on micro, small and medium businesses. This aggregation of merchants that we have created will have certain needs and the question is whether we will be able to cater to those needs and monetise our services," Sanjay Sethi, co-founder and CEO, Shopclues, told Techcircle.in.

"We have half a million merchants now. That is a potential business opportunity in itself," he said.

Shopclues offers services such as building and maintaining websites and mobile apps for the sellers and powering the electronic point of sales in their physical stores. "We enable merchants on all channels. Our site helps aggregate merchants and allows them to run businesses wherever they would want to operate them," Sethi said.

Shopclues is bringing about myriad services in partnership with web hosting company GoDaddy, the mobile payment startup Momoe that the company recently acquired, the chat app for merchants HeyBiz in which it holds stake, search giant Google and others.

"Our non-transactional revenues come from traffic and platform monetisation. For example, we have a merchant mobile banking solution from Momoe. Multiple products will be unveiled in the near future," said Radhika Aggarwal, co-founder and chief business officer, Shopclues.

"Partnerships and acquisitions will help us build the ecosystem of services," said Sethi.

Shopclues recently launched an advertisement platform Adzone for merchants in partnership with C1X, an ad-tech company. The firm plans to acquire companies in data science, analytics and other niche technology domains.

Shopclues, which is backed by Tiger Global, GIC and Nexus Venture Partners, has so far raised around $200 million and is considered a unicorn worth around $1.2 billion, as per its valuation at the time of its last fundraising early this year. The firm claims $700 million GMV on an annualised basis and said would achieve $1 billion sales run rate by the end of this financial year. It is targeting to become operationally profitable by the second quarter of next financial year.