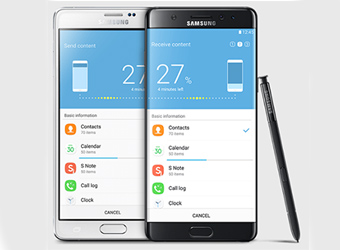 Samsung launched its flagship device Galaxy Note7 in India almost 10 days after it was launched in New York.

Galaxy Note7 has been launched for Rs 59,900 in India. Along with the device, the company also launched its wearable portfolio comprising Gear Fit2, Gear IconX and Gear VR.

The highlights of the device are the iris scanner and the new improved S-Pen Stylus. The phone also comes with a 3,500 mAh battery.

The phone comes with a curved 5.7-inch QHD Super AMOLED screen. This is the first device in the Note family to be water resistant to a maximum depth of 1.5 metres for up to 30 minutes. It is equipped with 64 Bit, Octa-Core processor (2.3GHz Quad + 1.6GHz Quad) and 4GB RAM.

The Note7 offers a hybrid dual SIM slot and the memory can be expanded to 256GB. This Galaxy Note7 comes with the same camera as the Galaxy S7 and Galaxy S7 Edge. It features a 12MP dual-pixel rear camera with a wide aperture of f/1.7 and a 5MP front-facing snapper.

Galaxy Note7 will be available in color options of Gold Platinum, Silver Titanium and Black Onyx.

The pre-booking opens from August 22 and the device will be available from September 2. Samsung has also tied up with Reliance Jio to offer complimentary unlimited voice and data access to Note7 users for 90 days.