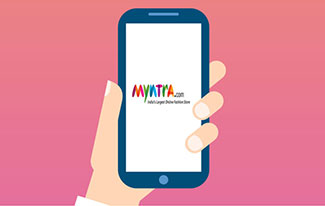 Flipkart-backed owned Myntra claims to have crossed $1 billion run rate in annualised gross merchandise value (GMV) in July 2016, making it the biggest ever month by sales for the fashion e-tailer.

In a media briefing, the company said the new milestone is propelled by the growth of its private labels, increased contribution of international brands, high growth in sportswear and womenswear categories and a successful end-of-season sale. Myntra claims it is the first ever Indian fashion brand to achieve this landmark.

"The annualised GMV run rate of $1 billion puts us on the path to touching $1 billion GMV within a fiscal year. Our focus is on continuing to transform fashion and lifestyle in India through technology," said Ananth Narayanan, CEO of Myntra.

According to Narayanan, the company continues to see a 70% month-on-month growth despite inching closer towards full price sales as opposed to the discounting-led growth it had pursued earlier.

GMV refers to the total value of goods sold before factoring in discounts and is therefore much more than the actual selling price. Ecommerce firms often use this metric to measure growth. According to Myntra, this betters its performance in January this year when it claimed to have hit $800 million in annualised GMV.

"Our net promoter score (NPS), which is another measure of customer experience, has also gone up by 10 points," said Narayanan. Myntra claims to have an NPS of 50% and is looking to touch 60%. Simply put, for every 100 shoppers on the site, 50 are likely to promote the brand to their friends and family. This is seen as a measure of customer loyalty.

NPS, as a metric, has now taken precedence over GMV as a preferred measure of growth after ecommerce firms have shifted their focus from deep discounting-led sales strategy towards cutting costs and achieving profitability.

Myntra also expects the branded fashion market to grow twice as faster as the overall fashion market within five years and has added to its portfolio several domestic and internal brands that include Sachin Tendulkar's True Blue, Khadi Originals from IndusDiva, TOMS and Meters/bonwe.

As part of its omni-channel strategy, Myntra will open its first physical experience store within three months in Bangalore, which will have brands like Roadster, HRX and All About You. However, Narayanan refused to divulge further details on this.

Last month, Myntra agreed to acquire Jabong for $70 million in an all-cash deal. Post this deal, Myntra is expected to control 70% of the online fashion market.

It also acquired a majority stake into Hrithik Roshan-owned fashion brand HRX, in a deal that is expected to help Myntra augment its private label business.

Myntra is also targeting a strong growth in new segments such as home furnishing, personal care business which it re-launched and is also expanding sales of jewellery. It claims that home furnishing currently accounts for 1% of revenues and is growing at 50-60% on a monthly basis.