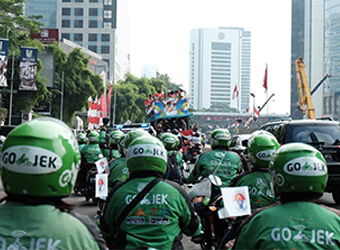 As part of the acquisition, Pianta will be integrated into Go-Jek's local arm, Go-Jek Engineering India, which is based in Bengaluru. The Indonesian company is looking to double its existing India headcount of 70 employees in coming months, the company said in a statement.

Pianta's three co-founders will join the leadership team at Go-Jek Engineering India, led by Sidu Ponnappa, whose tech firm C42 Engineering was bought in 2015 by Go-Jek, as the managing director.

"Go-Jek provides us with a great opportunity to leverage the capabilities that we at Pianta have built in the domain of on-demand delivery and logistics," said Swaminathan Seetharaman, CEO and co-founder of Pianta, operated by SLX Logistics Pvt. Ltd.

The acquisition comes barely months after Pianta secured seed funding in May from FreeCharge founders Kunal Shah and Sandeep Tandon.

The startup helps users discover and book appointments with healthcare providers who come to the home for services such as physiotherapy, nursing and collecting lab samples. It was founded in 2015 by Swaminathan Seetharaman, Ganesh Subramanian and Nitin Agarwal. Seetharaman previously worked with Ola as vice president of engineering while Subramanian was earlier principal architect at the cab-hailing firm. Agarwal was earlier a director of engineering at Flipkart.

This is Go-Jek's third acquisition in India and the first in the country's healthcare segment.

Go-Jek was founded in 2010 by Harvard alumnus Nadiem Makarim and Michaelangelo Moran. It has partnerships with 200,000 motorcycle and car drivers and 5,000 truck drivers. It launched its bike-hailing app in January 2015. Besides urban transportation, it offers services for food delivery, an aggregation platform for shopping centres and e-wallet. To provide these services, the company has taken on board 35,000 food merchants and more than 3,000 service providers on its platform.