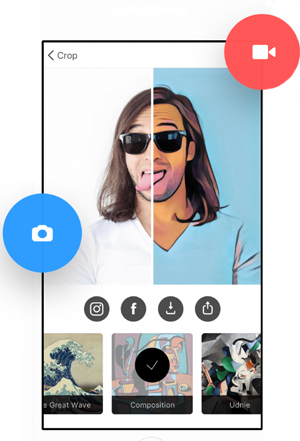 Popular photo-editing app Prisma, which turns photos into pieces of art, will now help you convert video clips into animations. Prisma will be offering video support for 15-second clips on iOS with its latest update, reports TechCrunch. Currently, the feature is not available on Android but is expected soon.

Prisma, which took the internet by storm when it first launched in June 2016, will be using nine filters to turn video clips into animations.

The video feature, which is still in its beta version, allows users to record videos from within the app or select pre-recorded videos. The videos are processed on the users' smartphone, which means that the feature will also work without an internet connection.

The processing time for Prisma video on iOS is around two minutess for the iPhone 6; 55-60 seconds for iPhone 6s and half a minute for iPhone 7, Aram Airapetyan, co-founder of Prisma Labs told TechCrunch. The company is also looking to launch GIF creator on its iOS app soon.

For those who are not aware about Prisma, the app turns all photos into a work of art by using the styles of famous artist such as Vincent van Gogh and Picasso as well as world-famous ornaments and patterns.

It doesn't just apply filters but also rebuilds the entire photo by a combination of styles and uses deep learning and artificial intelligence technology. The app has around 70 million downloads till now.