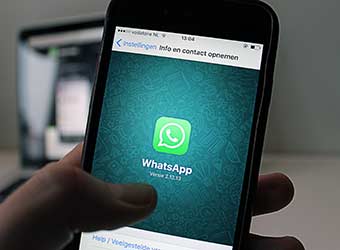 Facebook-owned messaging app WhatsApp is rolling out its much awaited 'video calling' feature. The feature, in its beta version, is being tested by users who are members of Android's beta programme.

WhatsApp instead of adding another new button for video calls has baked-in the functionality right within the calling button on the top right.

The video calling feature is currently unavailable on iOS devices.

How to make a WhatsApp Video Call?

On pressing the dialler icon, the user will need to choose between making a voice call or a video call. Considering that both users will have to be a part of Android's beta testing programme, if the receiver is using an older version, a prompt "Couldn't place call" will appear on the mobile screen followed by a text message "Couldn't place call. Recipient [name of contact] needs to update WhatsApp to receive video calls."

Even as the feature seems to work well in bad network areas, the audio quality on the video call remains a disappointment.

Anyone willing to check out the video calling feature may sign-up for the beta testing programme and test the new video calling feature. However, according to an article on Android Police, many users on the beta version were unable to try the feature. The same article suggests clearing the app data and re-logging in to WhatsApp (backup is recommended before wiping out data).

Mails written to WhatsApp did not elicit any response till the time of filing this report as to when will the feature be rolled out for all users.