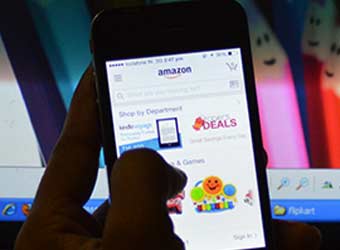 American online retail giant Amazon.com Inc. is reportedly trying to establish its presence in Singapore, in what could be a step towards tapping the Southeast Asian market.

In June this year, Amazon's founder Jeff Bezos had pledged a $3billion investment into India to fight local e-commerce rivals Flipkart and Snapdeal. And now Amazon, the world's biggest e-tailer, wants to launch a few services in Singapore within the first quarter of calendar year 2017.

Meanwhile, on Wednesday, Singapore-based online grocer RedMart Ltd was bought by Alibaba-backed Lazada Group. According to The Wall Street Journal, Lazada has been expanding in the region since its launch in 2012. In April, Alibaba had announced that it is going to buy a majority stake in Lazada for $1billion, in its largest acquisition outside China till date.

It seems Amazon's entry into the island state next year will spark a rivalry between Alibaba-controlled startups and the US giant. A similar scene is already present in India. Alibaba Group and its affiliate Ant Financial are the largest shareholders in One97 Communications, which runs e-commerce and mobile wallet platform Paytm.  With an investment around $680 million, they hold almost 40% stake in Paytm founded by Vijay Shekhar Sharma. There were also reports that Alibaba may pick a majority stake in Paytm's e-commerce business.

According to a recent filing with the Registrar of Companies (RoC), Paytm has created two separate entities christened Paytm E-Commerce Pvt. Ltd and Paytm Payments Bank Ltd under which its e-commerce and banking services will operate, respectively.

VCCircle had reported that the objective behind the exercise is to help the new e-commerce company raise larger investment from its existing investor Alibaba and also from Japanese technology company SoftBank Group Corp, which owns more than a 32% stake in Alibaba.

It is clear that both Amazon and Alibaba want to spread their tentacles across Asia.

According to TechCrunch, Southeast Asia has over 600 million consumers and online use is estimated to account for less than five percent of all commerce today. Apart from Lazada, Alibaba has investments in delivery firm SingPost, and payments startup Ascend Money. RedMart, founded in 2011, which was reportedly facing a fund crunch, counts Japan's SoftBank Group, US-based Visionnaire Ventures and Facebook co-founder Eduardo Saverin as its investors. Two years ago, it had raised $23 million in Series B funding, which took its total raised capital to $27 million, as per the company's website.