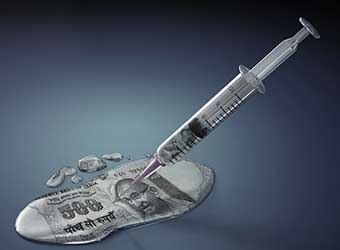 Amitabh Nagpal, the co-founder of Life in Control, which was founded in 2015, confirmed the development but did not give further details. RoundGlass Partners did not respond to a mail till the time of filing this report.

The venture capital firm typically invests between $400000 and $1 million in a company, according to News Corp VCCEdge, the data and research platform of VCCircle.

The Life in Control app, which is available both in Android and iOS platforms, is designed to connect doctors and patients to help patients better manage their glycemic status in collaboration with their doctors, according to its website. It also analyses patients' historical data to predict secondary complications aimed at preventing diabetes and promoting wellness.

The estimated cases of diabetes in India in the age group of 20-70 years were 6.68 crore and 6.91 crore in 2014 and 2015, respectively, according to data from International Diabetes Federation (IDF). The number of patients with diabetes is likely to rise to 101 million in India by 2030, according to the World Health Organization (WHO).

Nagpal was the co-founder of telecom system integration and outsourcing company Cymbal Corp, which was acquired by Patni Computer Systems for $68 million in 2004. He was also the head of Educomp Solutions' private equity fund India Education Fund for the education sector.

Nagpal is also an angel investor and his investments in companies include e-commerce firm Shopclues.com and English language teaching tool English Helper.

Life in Control's co-founder Gaurav Daga previously worked as lead product manager in the cloud and enterprise division at Microsoft, according to his LinkedIn website.

A number of startups aimed at preventive healthcare have received funding in the past months including CureJoy, an online community that connects users with alternative medicine experts, and Touchkin eServices that operates predictive healthcare startup.

RoundGlass Partners, a Seattle-based venture firm that focuses on healthcare startups, was founded by Gurpreet Singh in 2014.

The venture capital firm has invested in eight companies in India so far out of which four investments excluding the Life in Control were done this year, according to VCCEdge.

Early in September, VCCircle reported that it invested in Doctor Insta Pvt. Ltd, which provides healthcare consultation through video conferencing.

It also invested in BabyChakra, which connects parents to services and products for babies; and Gympik.com, an online marketplace for discovering fitness centres and gyms, this year.

In 2015, the venture capital firm invested in companies including Uber Health Tech Private Ltd, a startup that builds social wellness apps for corporate staffers under the brand Zoojoo.be; and Wrig Nanosystems, a medical technology startup.