In fact, the last quarter of the calendar year saw the biggest-ever deal in the online travel space, with NASDAQ-listed MakeMyTrip Ltd acquiring Ibibo Group in a stock deal.

Experts believe the rising number of deals in the consumer internet space can be attributed to the depressed funding environment, and investors' want to shield their investments.

"I think what happens when funding becomes difficult is, investors sitting in these companies start looking for consolidation for two inherent advantages—one, cost reduction and two, it is also a defensive way of protecting your investments. Once you consolidate, the sum of parts is greater than their individual value," said Kunal Khattar, general partner, AdvantEdge Partners. 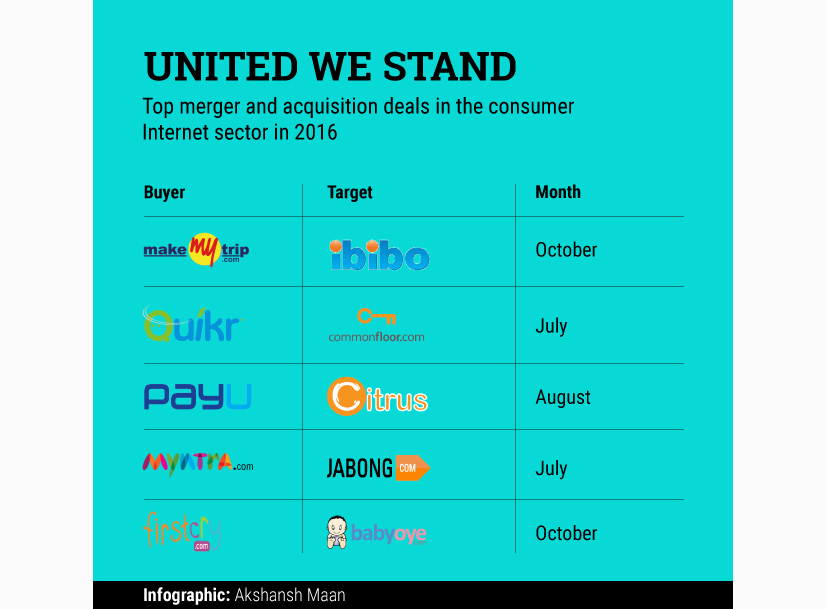 Here's a round-up of top M&A deals in the consumer internet space in 2016.

Quikr and CommonFloor In January 2016, general classifieds site Quikr said it had acquired real estate portal CommonFloor, and it will merge it with its property listings business QuikrHomes. The $112-million all-stock deal was put together by Tiger Global, the key investor in both Quikr and CommonFloor.

Jabong and Myntra In the biggest-ever deal in the online fashion space, Flipkart-owned Myntra pipped Snapdeal and Future Group to buy rival Jabong in a $70-million all-cash deal. The acquisition is core to Flipkart's strategy to maintain its lead over Amazon, especially in high-margin segments like fashion apparel.

FirstCry and BabyOye Online babycare store FirstCry acquired Mahindra's BabyOye for Rs 362 crore in a cash-and-stock deal. The move was expected to help the company strengthen its offline presence as well as consolidate its lead in the babycare segment.

MakeMyTrip and Ibibo Group Although neither firm divulged the numbers, a note by Morgan Stanley pegged the deal value at $1.8 billion. The acquisition brings all Ibibo brands, such as Goibibo, redBus, Ryde and Rightstay, under MakeMyTrip.

Angel investor Ajeet Khurana believes 2016 was all about negative M&As, where one or both parties are weak and investors are trying to drive consolidation.

"If you talk about the startup ecosystem and the economy, I think negative M&As definitely help. I think letting the living dead startups loiter around helps nobody," he says.

Rajul Garg, an investor in companies like Meesho and BabyChakra, feels that consolidation will be the trend next year as well: "It was an important year not just for consolidation but I think startups got grittier and more real this year. Funding was harder to get in 2016, so consolidation was an option that many companies pursued. I personally feel, a lot of the consolidation will continue in 2017 as well."