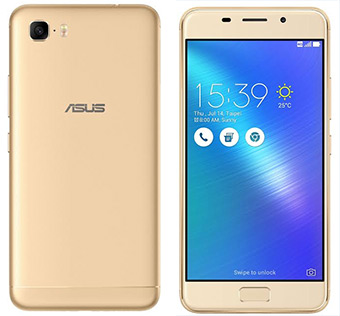 Taiwanese handset maker Asus on Tuesday launched its Zenfone 3S Max smartphone in India. Priced at Rs 14,999, the phone will be available starting today at both retail outlets as well as e-commerce portals.

With the Zenfone 3S Max, Asus is betting not only on its heavy-duty 5,000 mAh battery, but also the fact that it ships Android 7.0 Nougat out of the box. The company had launched two variants of the Zenfone Max last year.

"The all-new Zenfone 3S Max has a powerful battery, along with tasteful aesthetics and superb camera, making it well-suited for the needs of today's users," Peter Chang, region head, South Asia and country manager, Asus India, said in a statement.

The device features a 5.2-inch HD IPS display, along with a metal body and 2.5D contoured glass. While a 1.5GHz octa-core, 64-bit processor does duty in the phone, a 3GB RAM powers it. The phone comes with an internal memory of 32GB, which is expandable up to 2TB.

On the imaging front, the Zenfone 3S Max comes with a 13MP camera that supports phase detection autofocus, and has a Æ’/2.0 aperture and dual LED real-tone flash. The front camera is 8MP with features like beautification mode, HDR mode and low-light mode.

Asus claims that the 5,000 mAh lithium-polymer battery provides up to 34 days of standby time on 4G, 28 hours of talk time on 3G, 18 hours of video playback and 25 hours of Wi-Fi Web browsing. The phone also comes with a front fingerprint sensor, which, the company claims, unlocks the phone in less than a second.

The Zenfone 3S Max is available in two colors—Black and Gold.

With the Zenfone 3S Max, Asus has unveiled another big-battery contender in the sub-15K category. But upsetting the existing order will be not be easy —the Xiaomi Redmi Note 3 and Note 4, and Lenovo's P2 and K6 Power pack quite a punch.

The immensely popular Xiaomi Redmi Note 3, which boasts of a 4,100 mAh battery, could have an edge over the 3S Max given its overall features. Redmi Note 4's 64GB variant also comes Rs 2,000 cheaper than the 3S Max. Besides, the 5,000 mAH battery of the 3S Max isn't the biggest in business—Lenovo's P2 already comes with a mammoth 5,100 mAH battery.

All in all, the sub-Rs 15,000 segment is set to witness even more intense competition following the 3S Max's launch. The fact that it carries Android 7.0 out of the box will certainly help its cause, but time alone will tell if it can stand the fierce competition from its Chinese rivals.