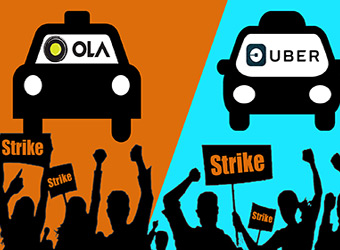 Nearly 90% of the one lakh cab drivers associated with taxi-hailing companies Ola and Uber are taking part in an indefinite strike in Bengaluru, bringing the app-based taxi services to a grinding halt in the city.

The protesters demand better incentives and relaxed work hours and call for an immediate decision on stopping attachment of new cabs.

Meanwhile, several cases of untoward events are being reported across the city as protesting drivers are forcefully stopping cabs and leaving many commuters stranded in the middle of their trips. Incidents of stone pelting at cabs, physical assault of drivers and road blockades too are reported.

"Although we are on an indefinite strike, we have not planned any mass protest today. We are trying to stop the running taxies and requesting them to join the strike as many of them are unaware of the strike," Tanveer Pasha, president of Ola, TaxiForSure and Uber (OTU) Drivers' and Owners' Union, told Techcircle.in.

On Wednesday, Uber's office in HSR Layout was attacked by a group of protesting drivers who pelted stones at the building. Pasha, while terming it an unfortunate incident, alleged that discrepancies in payment coupled with unruly behaviour of Uber management triggered the attack. He said the drivers went to enquire about payment issues. Uber pays its drivers on every Tuesday.

He said the protesters are arranging other modes of transportation for commuters of the cabs being stopped and allowing drivers to the complete trips in case of emergencies or if commuters are elderly people.

He accused that the government and transport officials are hand in glove with the cab companies and the political leaders are showing no interest in initiating a conversation to address the issue.

The protesting drivers plan to wait until tomorrow to decide the future course of action.

Last week, Pasha had told Techcircle.in that various unions from Delhi, Kolkata, Mumbai, Hyderabad, Bengaluru and Chennai are working together to call for a nationwide strike if their demands are not addressed.

"We are sorry that our service has been disrupted in Bengaluru. We are aware of isolated reports of threats and intimidation from a small group of people. We again call on the authorities to put an end to this illegal behaviour. We are committed to ensuring that drivers who wish to work are able to do so," an Uber spokesperson said.

The protesters demand that both Ola and Uber should adhere to Karnataka On-Demand Transportation Technology Aggregators Rules, 2016 that fixed taxi fares at Rs 19.50 per kilometre (for AC cabs) and Rs 14.50 per kilometre for (non-AC cabs). Currently, the cab aggregators offer deep discounts to offer rides at minimum charge of Rs 6 per kilometre. The protesters believe that they would be able to earn decent incentives if the operators start adhering to fares fixed by the government.

Besides, they want the taxi operators to immediately stop penalising drivers based on customer ratings.

The drivers had observed a one-day protest on February 16 when a fresh round of talks between driver representatives and cab-aggregators failed to yield any results. Uber representatives abstained from the meeting while Ola asked for 15 more days to address the issues raised by the agitators. Two protesting drivers attempted suicide outside Ola office during the agitation.

The services were partially affected on February 15 as well due to a strike called by various unions protesting against a recent hike in driving licence and other fees by the Regional Transport Office (RTO) in addition to the flexible fare structure followed by cab aggregators and falling income of drivers associated with them.