More unicorns have emerged out of India in the first seven months of 2018 than in any previous year, as venture capital investors poured large sums of money into established startups.

A unicorn refers to a private-held tech startup valued at $1 billion or more. 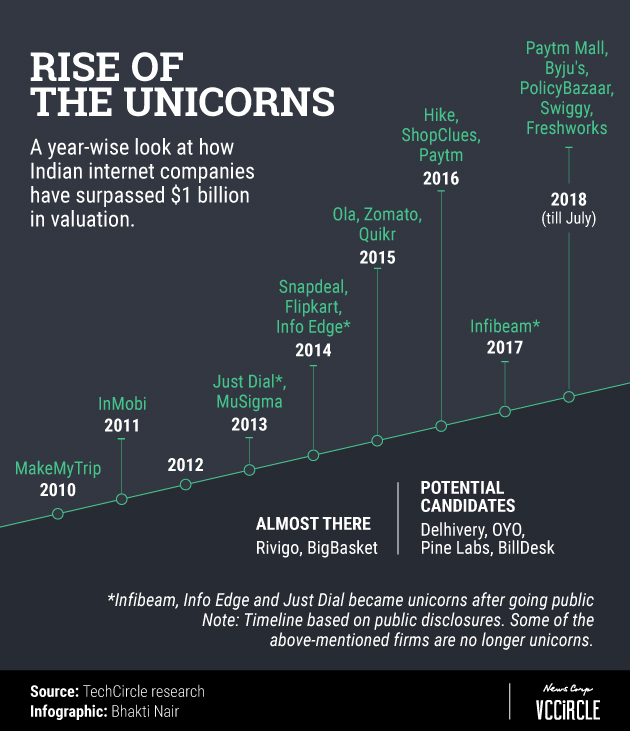 According to TechCircle estimates, privately-held tech unicorns have amassed around $18 billion in venture capital investments over the past decade or so.

Between April and July, Paytm Mall, PolicyBazaar, Swiggy and Freshworks raised a combined $960 million in external funding. Byju’s became a unicorn in August 2017, a person privy to the development told TechCircle, though the development was only reported this year.

Some established unicorns have continued growing and were valued at more than $2 billion as of May 2018. These include homegrown e-commerce firm Flipkart, cab-hailing app Ola, online travel portal MakeMyTrip and publicly listed Info Edge.

Paytm Mall was the fastest Indian startup to achieve unicorn status as it took less than two years to touch $1 billion in valuation.

A number of other Indian ventures are close to reaching unicorn status, including online grocery startup BigBasket, which was just shy of the $1 billion-mark when it raised $300 million (Rs 1,921 crore) in a Series E round led by Chinese e-tailer Alibaba in February this year. At the time of the fundraise, the company was valued at $950 million.

Another startup which is close to wearing the unicorn badge is logistics startup Rivigo, which is backed by venture capital firm SAIF Partners and private equity giant Warburg Pincus. The startup had raised $50 million in January this year and was valued at close to Rs 6,000 crore ($945 million then).

According to Hari Menon, co-founder and chief executive of BigBasket, the reason for the rise in the number of unicorns is because companies with strong growth and unit economics continue to get funded.

“The period between 2012 and 2015 was one of exuberance. 2016 and 2017 presented the inevitable correction. In that sense, we are at a more mature phase. The next few years should see unicorns emerging at a faster pace,” he explained.

“Valuations follow growth, and as revenues scale in conjunction with sensible economics, valuations are bound to grow,” he said. “I am pretty sure we will see many more billion-dollar companies in the coming years, owing to increasingly larger addressable markets and high-quality entrepreneurs who are effective at scaling ventures.”

While the number of unicorns coming out of India does not match that of other countries like the US and China, analysts believe the pace at which investments will pour into the country’s startups will only grow.

“It is a good development to see investor interest revived in the startup space and Indian companies picking up and getting the unicorn tag. Investors always want to pour in money but they want to make safe bets as well,” said Devendra Agrawal, co-founder of investment bank Dexter Capital.

Despite the optimism, some of the earlier entrants to the unicorn club have since lost their sheen.

Online local business search engine Just Dial, which is listed on the stock exchange, and e-commerce marketplace Snapdeal once commanded a valuation of $1 billion but are now no longer considered unicorns.

It had initiated discussions to merge with its rival on the directive of SoftBank, its largest investor.