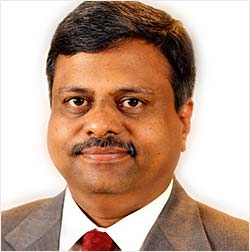 German engineering and electronics giant Robert Bosch Gmbh expects adoption of the blockchain ledger technology in various industries to go mainstream as early as 2021, its innovation and incubation head in India told TechCircle.

"We see the adoption accelerating in 2019. All signs are there which say that crossing the chasm could happen within the next couple of years," Krishnan said, referring to blockchain's use.

Blockchain is an immutable book-keeping technology that uses cryptography to time-stamp all transaction data in that particular chain. The technology is known more for being the force behind cryptocurrencies such as bitcoin, but its other uses are also increasing.

Krishnan, who has previously worked with the Indian Space Research Organisation for almost a decade, said a lot of large enterprise customers across industries understand that adoption of blockchain will reduce inefficiencies and costs.

Krishnan's optimism about blockchain's adoption isn't without reason. Companies across sectors and countries are working on using blockchain for a range of functions.

For instance, European retailer Carrefour has adopted blockchain to track chicken, eggs and tomatoes as they travel from farms to stores. Earlier this month, HSBC India and ING Bank together deployed blockchain to accelerate a trade-finance deal involving Reliance Industries Ltd.

While there is a general consensus that blockchain will become mainstream across sectors, the projected timeline differs. The Capgemini Research Institute, for instance, said last month that blockchain could enter mainstream businesses by 2025.

In the agricultural sector, the company is working with farmers and large farm export companies in certifying the origin of their products, whether those are organic produce,  how and where they are grown or whether they are grown ethically.

"An extension of that would be adding artificial intelligence on top of this. We can assess the quality of produce by monitoring the temperature of the supply chain infrastructure and realise a real-time pricing model for these products as and when they reach markets," Krishnan said. "People are willing to pay a premium while in some European countries it is even mandatory to have these produced ethically by not employing child labour and so on."

Bosch is also working with its own vendors and suppliers in the automotive industry to eliminate spurious components in the market. Krishnan cited the example of the small European nation of Estonia, which has moved all government functions to blockchain.

Krishnan said blockchain implementation could reduce time drastically in transportation, especially across international borders, if customs and other regulators come onboard.

"Once the non-trusting parties can come together, transportation of goods and services will be much more seamless and automated and would not require checking at borders. However, we need organisations like customs, other government agencies or regulators to come on board. Its effectiveness is proven in fintech and, hence, this could happen sooner," Krishnan said.

Krishnan said blockchain adoption has taken off much faster than other technologies like data analytics and artificial intelligence because enabling infrastructure such as high computing power and fast internet connectivity have already been in place.

The Stuttgart-based engineering giant said the objective of the company's innovation and incubation business unit is to identify new technologies and invest in those during the early days of the hype cycle so that it doesn't lose out on a large opportunity.

"We identify megatrends and look for the implementation of that model across several industry verticals. For instance, the sharing economy is a megatrend," Krishnan said on the division's vision in identifying sectors for business opportunities across multiple verticals.